Due to the bad weather conditions last week, I've decided to clean up some mess on the hard drive of my home PC. While cleaning, I found some old files transferred from an old computer. Previously, I wrote a blog post about my first computer, so I've decided to write a follow up story about the second, which was the last 'classic computer' I used, before I moved over to the boring PC era. 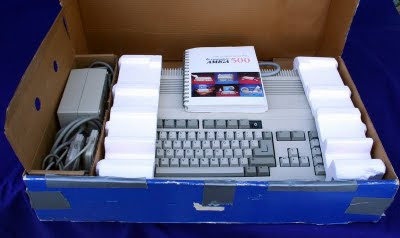 My second computer was a Commodore Amiga 500 produced by the same manufacturers of my good old Commodore 128. This computer has a completely new hardware architecture and was not compatible with any model of the 8-bit computer product line. A picture of this computer is shown above (I took somebody else's picture, because mine doesn't look that pretty anymore).

The Amiga 500 had a Motorola 68000 processor running at ~7 MHz and 512 KiB of chip memory (RAM shared by the video chip and applications). In our model, we've upgraded the amount of chip memory to 1 MiB and we've replaced the OCS chipset by the newer ECS chipset. Moreover, we also owned a 100 MiB harddrive, which included 8 MiB fast memory (RAM which is not shared with the video chip and thus faster).

Although these specs aren't that impressive for nowadays' standards, back then the Amiga was far ahead of it's time. At it's launch in 1987, its multimedia features were superior to the PC. The sound chip was probably it's most praised feature, which supports four sound channels (two for the left speaker and two for the right) with 8-bit resolution for each channel and a 6-bit volume control per channel. The Sound Blaster card of the PC at that time wasn't capable of this.

The Amiga was quite easy to use. For most users, the Amiga was used as a gaming machine. When turning the Amiga on, an image (or animation) appeared on the screen requesting the user to insert a floppy disk: 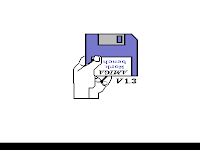 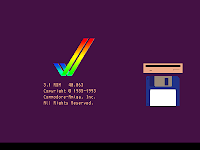 By inserting a floppy disk of a game or program, the system automatically booted from the disk starting the program or game. This was possible, because operating system parts such as the shell were stored in the Kickstart ROM. Moreover, most commercial game disks used custom implemented bootblocks bypassing the operating system shell and filesystem completely. 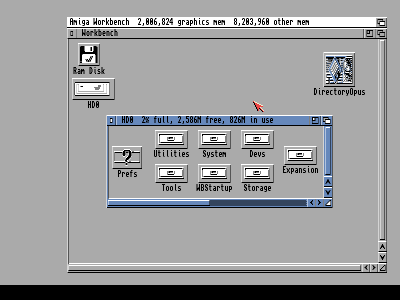 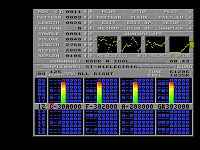 A program I used quite a lot was ProTracker, to make my own musical compositions. A screenshot is shown on the left.

The idea of ProTracker was simple; A user has 4 channels to create sequences of notes (called "patterns"), which are chained together to form a complete song. ProTracker was probably not the best composer available for the Amiga, but was used quite frequently by game developers.

The MOD file format which ProTracker used, was also the de-facto file format for music and supported by many programs, because it was close to the underlying Amiga hardware and only required 4% of CPU usage to play a song (so that still plenty of system resources were available for graphics and other tasks).

I composed quite a number of Protracker modules, which I used for various purposes. Although most of the songs I composed sucked completely, there were also some nice ones :-) 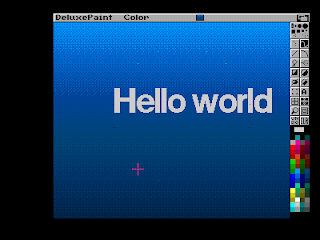 I also did some painting with Deluxe Paint. The graphics abilities of the Amiga were quite limited compared to graphics hardware we use nowadays. On the Amiga 500 only 32 configurable color registers were available, storing color values out of 4096 possible colors. More modern Amiga models (having the AGA chipset), supported 256 configurable colors out of 16 million colors, but unfortunately I didn't have such an advanced model. :-)

The Amiga has a number of special screen modes to use more colors out of the preconfigured 32. The Extra Halfbrite (EHB) screenmode offers 64 colors, in which the last 32 were half of the color values of the first 32. The Hold-and-Modify (HAM) screen mode modifies one of the red, green and blue channels of the adjacent pixel or picks a new color from the palette, so that (in theory) all 4096 colors can be used on one screen, using only 6 bits per pixel. 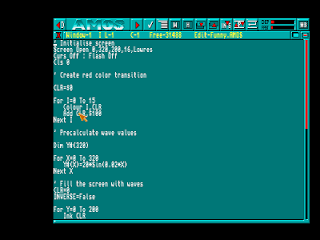 Apart from a BASIC interpreter and IDE (shown above), AMOS also included complementary utilities for creating sprites/blitter objects and AMAL, an animation scripting language and a compiler to create native executables. Moreover, it also included many example programs and even a number of complete games including their source code.

Furthermore, AMOS also had high level instructions to open IFF/ILBM files for images (created by programs such as Deluxe Paint) and a music player routine for the MOD format (to support music created by Protracker). These features allowed me to combine the earlier two tools to develop games. I did quite a number of attempts to develop a serious game and I received quite some interesting results. Unfortunately, I did not have all the knowledge and skills that I needed to develop something really useful. Also, because of my messy programming style, things became so complex that I abandoned the stuff I was working on, to start all over from scratch.

AMOS was quite successful back these days and it was used for a number of commercial games, such as Jetstrike and Scrorched Tanks. 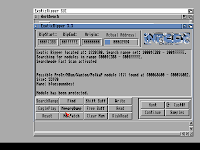 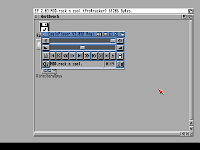 Another reason why ripping was so interesting, was because most games used the MOD file format. This allowed me to study how these songs were composed with Protracker and to steal their samples, which I used in my own songs. :-)

Eagle player (shown left) was an awesome player able to play many music formats, which allowed me to play the exotic formats that I've retrieved by using Exotic Ripper.

Another notable application I used was Scala Multimedia. I didn't find this program that interesting for myself, but my mother and grandfather used this program to create video presentations and combine these presentations with video recordings by using a Genlock device. I discovered the abilities of this program much easier than them :-)

Scala could be considered as a predecessor of the Microsoft PowerPoint presentation program combined with video editing possibilities. 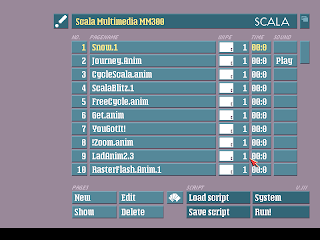 This idea of Scala is easy. Users create scripts, which are a sequence of scenes. For each scene, a user can specify a transition effect, transition time and some background music (using a file in MOD format). Each scene may contain text, pictures and/or animations (which are in IFF/ILBM format). Below I've included some screenshots from Scala scripts: 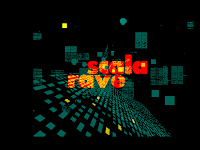 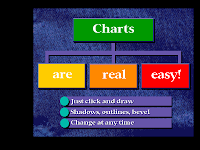 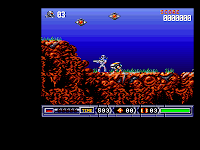 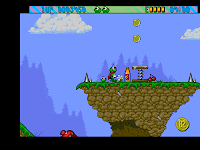 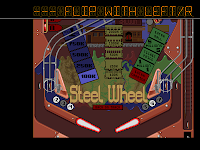 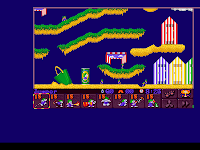 Of course, the Amiga was very popular as a gaming machine. Above, some screenshots are shown of Turrican 2 (a conversion of the Commodore 64 version), Superfrog, Pinball Dreams and Lemmings Tribes 2. Except for good graphics, these games were also praised for their high quality soundtracks.

The Amiga showed great potential in the early 90s. Back then, the PC was still a very primitive/dull platform. Many tasks that we perform on our computers nowadays, were already possible back then, although not everything didn't looked that pretty. My current PC has 8 GiB of RAM (which is one thousand times the amount of RAM in the Amiga), but sometimes I get the impression that the things we do on our computers haven't improved that much.

Unfortunately, the PC hardware kept improving and eventually overtook the capabilities of the Amiga. When the new Amiga models having the AGA chipset (supporting 256 color registers) were launched, the SVGA graphics capabilies on the PC were superior to the Amiga. Moreover, due to some bad business decisions of Commodore, they went bankrupt in 1994. I still used the Amiga for about one year and then I moved to the PC.

I'm happy to report that my Amiga is still in my posession. The only bad thing is that I don't have working monitor anymore.

After Commodore went bankrupt, the Amiga is still not completely dead. Currently, the brand is owned by a company called Amiga Inc. Moreover, a company called Hyperion Entertainment continued the development of AmigaOS and has released version 4.0. There are rumours that some day a new Amiga product line will be sold, but nobody knows whether this is really going to happen.