Recently, I have ported SDL_ILBM to SDL 2.0, since it's out there for a while now. SDL 2.0 has many improvements over SDL 1.2 and is typically a better fit for modern hardware.

The majority of the porting activities were quite straight forward, thanks to the SDL 1.2 to 2.0 migration guide. What impacted SDL_ILBM were the following:


Properly supporting the latter aspect puzzled me a bit, because the migration guide did not clearly describe what the best way is to continuously render 8-bit palettized surfaces for every frame.

SDL_ILBM generates these kind of surfaces for the majority of ILBM images by default (images using the HAM viewport mode are notable exceptions, because they typically contain more than 256 distinct colors). I need to update these surfaces for every frame to support animated cycle ranges.

In this blog post, I will describe what I did to support this, because I couldn't find any hands on information about this elsewhere and I think this information might be helpful to others as well.


In the old implementation using SDL 1.2, the viewer application basically did the following: It first parses an IFF file, then extracts the ILBM images from it and finally composes SDL_Surface instances from the ILBM images that are shown to the user. Then the application enters a main loop which responds to user's input and continuously updates what is being displayed in the window.

Expressing this in very simplified code, it looks as follows. First, we obtain an SDL_Surface that contains the represents an ILBM image that we want to display:


When using the default options, it produces a 8-bit palettized surface, unless you try to open an image using the HAM viewport setting.


Besides constructing a window, SDL_SetVideoMode() also returns an SDL surface representing the graphics that are displayed in the window. The SDL_HWSURFACE parameter is used to tell SDL that the pixel data should reside in hardware memory (video RAM) instead of software memory (ordinary RAM), which the picture surface uses.

Eventually we reach the main loop of the program that responds to user events (e.g. keyboard presses), updates the pixels in the picture surface when cycling mode is turned on and flips the logical and physical screen buffers so that the changes become visible:


After changing the palette and/or the pixels in the picture surface, we can simply use SDL_BlitSurface() to make the modified surface visible in the window surface. This function also converts the pixels into the format of the target surface automatically, which means that it should work for both 8-bit palettized surfaces as well as RGBA surfaces.


Since SDL 2.0 has a more advanced graphics rendering pipeline, there are more steps that we need to perform. Constructing the same window with the same dimensions in SDL 2.0 must be done as follows:


Besides a window, we must also construct a renderer instance, that renders textures on the window:


The renderer is capable of automatically scaling a texture to the window's dimensions if needed. The following instructions configure the renderer's dimensions and instruct it to use linear scaling:


In SDL 2.0, a texture is basically a pixel surface that resides in hardware memory while an 'ordinary' surface resides in software memory. In SDL 1.2 both were SDL surfaces with a different flag parameter.

The previous steps were quite easy. However, while I was trying to port the main loop to SDL 2.0 I was a bit puzzled. In order to show something in the window, we must ensure that the pixels are in hardware memory (i.e. in the texture). However, we do not have direct access to a texture's pixels. One of the solutions that the migration guide suggests is to convert a surface (that resides in software memory) to a texture:


The above function invocation creates a texture out of the surface and performs all necessary steps to do it, such as allocating memory for the texture and converting chunky pixels to RGBA pixels.

Although this function seems to do everything we need, it has two drawbacks. It allocates memory for the texture which we have to free ourselves over and over again, while we know that the texture always has the same size. Second, the resulting texture is a static texture and its pixels can only be modified through SDL_UpdateTexture(), which is also a slow operation. Therefore, it is not recommended to run it to render every frame.

A faster alternative (according to the migration guide) is to use a streaming texture:


However, we cannot construct textures that store its pixels in chunky format, so we have to convert them from the surface's format to the texture's format. After studying the SDL documentation a bit, I stumbled upon SDL_ConvertPixels(), but that did not seem to work with the picture surface, because the function cannot convert surfaces with an indexed palette.

I ended up implementing the main loop as follows:


I introduced another SDL surface (windowSurface) that uses a format closer to the texture's format (RGBA pixels) so that we can do the actual conversion with SDL_ConvertPixels(). After modifying the pixels in the 8-bit palettized surface (pictureSurface), we blit it to the window surface, which automatically converts the pixels to RGBA format. Then we use the window surface to convert the pixels to the texture's format, and finally we render the texture to make it visible to end users.

This seems to do the trick for me and this is the result: 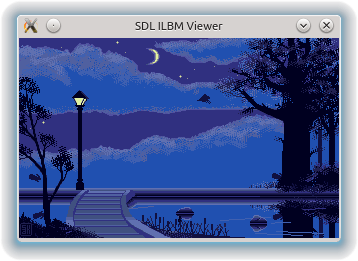 Moreover, if I enable cycling mode the bird and bunny also seem to animate smoothly.


In this blog post I have described my challenges of porting SDL_ILBM from SDL 1.2 to SDL 2.0. To be able to modify the pixels and the palette of an 8-bit palettized surface for every frame, I used a second surface that has a format closer to the texture's format, allowing me to easily convert and transfer those pixels to a streaming texture.

This approach may also be useful for porting classic 8-bit graphics games to SDL 2.0.

Moreover, besides SDL_ILBM, I also ported SDL_8SVX to SDL 2.0, which did not require any modifications in the code. Both packages can be obtained from my GitHub page.