Some time ago, I did a couple of fun experiments with my Android phone and the Android SDK. Moreover, I have developed a function that can be used to automate Android builds with Nix.

Not so long ago, somebody asked me if it would be possible to run arbitrary Android apps in NixOS. I realised that this was exactly the goal of my fun experiments. Therefore, I think it would be interesting to report about it.

Obtaining Android apps from a device


Besides development versions of apps that can be built with the Android SDK and deployed to a device or emulator through a USB connection, the major source of acquiring Android apps is the Google Playstore.

If I attach my phone to the computer and enable USB debugging on my device, I can run the following command to open a shell session:


While navigating through the filesystem, I discovered that my phone stores apps in two locations. The system apps are stored in /system/app. All other apps reside in /data/app. One of the annoying things about the latter folder is that root access to my phone is restricted and I'm not allowed to read the contents of it:


Later I discovered that Android distributions use a tool called pm to deploy Android packages. Running the following command-line instruction gives me an overview of all the installed packages and the locations where they reside on the filesystem:


As can be seen, the package manager shows me the location of all installed apps, including those that reside in the folder that I could not inspect. Moreover, downloading the actual APKs files through the Android debugger does not seem to be restricted either. For example, I can run the following Android debugger instruction to obtain Angry Birds that I have installed on my phone:


Running arbitrary APKs in the emulator


In my earlier blog posts on automating Android builds with Nix, I have described how I implemented a Nix function (called androidenv.emulateApp { }) that generates scripts spawning emulator instances in which a development app is automatically deployed and started.


Automatically starting apps in the emulator


As described in my earlier blog post, the script that launches the emulator can also automatically start the app. To do this, we need the Java package identifier of the app and the name of the start activity. While developing apps, these properties can be found in the manifest file that is part of the development repository. However, it's a bit trickier to obtain these attributes if you only have a binary APK.


Somewhere at the end of the output, the package name is shown (com.rovio.angrybirds) and the app's activities. The activity that supports android.intent.action.MAIN intent is actually the one we are looking for. According to the information that we have collected, the start activity that we have to call is named com.rovio.fusion.App.


Now that we have retrieved the Angry Birds APK and discovered the attributes to automatically start it, we can automate the process that sets up an emulator instance. I wrote the following Nix expression to do this:


And then play Angry Birds, by running:


The above script starts the emulator, installs Angry Birds, and starts it. This is the result (to rotate the screen I used the 7 and 9 keys on the numpad): 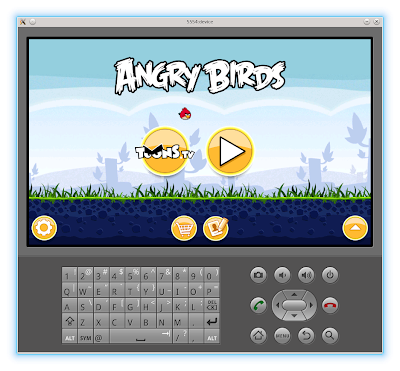 
I also discovered how to transfer the state of apps (such as settings and savegames) from a device to an emulator instance and vice-versa. For some games, you can obtain these through Android's backup functionality. The following instruction makes a backup from my phone of the state of a particular app:


When running the above instruction, you'll be asked for confirmation for making the backup and some details to optionally encrypt it.

With the following instruction, I can restore the captured state in the emulator:


While running the latter operation, you'll also be asked for confirmation.


In this blog post, I have described how we can automatically deploy existing Android APKs in an emulator instance using the Nix package manager. I have used it to play Angry Birds and a couple of other Android games in NixOS.

There are few caveats that you have to keep in mind:


The androidenv.emulateApp { } function is part of Nixpkgs.

It's also important to point out that the Nixpkgs repository does NOT contain any prepackaged Android games or apps. You have to obtain and deploy these apps yourself!

Posted by Sander van der Burg at 11:20 AM No comments: