Some people around me have noticed that I frequently use the command-line for development and system administration tasks, in particular when I'm working on Linux and other UNIX-like operating systems.

Typically, when you see me working on something behind my computer, you will most likely observe a screen that looks like this: 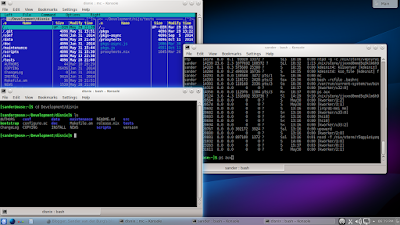 The above screenshot shows a KDE plasma desktop session in which I have several terminal screens opened running a command-line shell session.

For example, I do most of my file management tasks on the command-line. Moreover, I'm also a happy Midnight Commander user and I use the editor that comes with it (mcedit) quite a lot as well.

As a matter of fact, mcedit is my favorite editor for the majority of my tasks, so you will never see me picking any side in the well-known Emacs vs vi discussion (or maybe I upset people to say that I also happen to know Vim and never got used to Emacs at all). :-).


For Linux users who happen to do development, this way of working makes (sort of) sense. To most outsiders, however, the above screenshot looks quite menacing and they often question me why this is a good (or appealing) way of working. Some people even advised me to change my working style, because they consider it to be confusing and inefficient.

Although I must admit that it takes a bit of practice to learn a relevant set of commands and get used to it, the reasons for me to stick to such a working style are the following:


Something that I consider an appealing property of the automation and integration aspects is that people can develop "their own" commands in nearly any programming language (using any kind of technology) in a straight forward way and easily integrate them with other commands.

I have developed many command-line utilities -- some of them have been developed for private use by my past and current employers (I described one of them in my bachelor's thesis for example), and others are publicly available as free and open source software, such as the tools part of the IFF file format experiments project, Disnix, NiJS and the reengineered npm2nix.

Although developing simple shell scripts as command-line utilities is a straight forward task, implementing good quality command-line tools is often more complicated and time consuming. I typically take the following properties in consideration while developing them:


There are various ways to influence the behaviour of processes invoked from the command-line. The most common ways are through command-line options, environment variables and files.

I expose anything that is configurable as command-line options. I mostly follow the conventions of the underlying OS/platform:


I always implement two command-line options, namely a help option displaying a help page that summarizes how the command can be used and a version option displaying the name and version of the package, and optionally a copyright + license statement.

I typically reserve non-option parameters to file names/paths only.

If certain options are crosscutting among multiple command line tools, I also make them configurable through environment variables in addition to command-line parameters.

I typically use files to process or produce arbitrary sets of data:


Finally, every process should return an exit status when it finishes. By convention, if everything went OK it should return 0, and if some error occurs a non-zero exit status that uniquely identifies the error.


As explained in the previous section, I typically follow the command-line option conventions of the platform. However, parsing them is usually not that straight forward. Some things we must take into account are:


Luckily, there are many libraries available for a variety of programming languages/platforms implementing such a parser. So far, I have used the following:


I have never implemented a sophisticated command-line parser myself. The only case in which I ended up implementing a custom parser is in the native Windows and AmigaOS ports of the IFF libraries projects -- I could not find any libraries supporting their native command-line option style. Fortunately, the command-line interfaces were quite simple, so it did not take me that much effort.


Besides parsing the command-line options (and non-options), we must also check whether all mandatory parameters are set, whether they have the right format and set default values for unspecified parameters if needed.

Furthermore, in case of an error regarding the inputs: we must report it to the caller and exit the process with a non-zero exit status.


Another important concern while developing a command-line utility (that IMO is often overlooked) is providing documentation about its usage.

For every command-line tool, I typically implement an help option parameter displaying a help page on the terminal. This help page contains the following sections:


Besides concisely writing a help page, there are more practical issues with documentation -- the help page is typically not the only source of information that describes how command-line utilities can be used.

For projects that are a bit more mature, I also want to provide a manpage of every command-line utility that more or less contain the same stuff as a help page. In large and more complicated projects, such as Disnix, I also provide a Docbook manual that (besides detailed instructions and background information) includes the help pages of the command-line utilities in the appendix.

I used to write these manpages and docbook help pages by hand, but it's quite tedious to write the same stuff multiple times. Moreover, it is even more tedious to keep them all up-to-date and consistent.

Fortunately, we can also generate the latter two artifacts. GNU's help2man utility comes in quite handy to generate a manual page by invoking the --help and --version options of an existing command-line utility. For example, by following GNU's convention for writing help pages, I was able to generate a reasonably good manual page for the disnix-distribute tool, by simply running:


If needed, additional information can be augmented to the generated manual page.

I also discovered a nice tool called doclifter that allows me to generate Docbook help pages from manual pages. I can run the following command to generate a Docbook man page section from the earlier generated manpage:


The above command-line instruction generates a Docbook 5 XML file (disnix-distribute.1.xml) from the earlier manual page and the result looks quite acceptable to me. The only thing I had to do is manually replacing some xml:id attributes so that a command's help page can be properly referenced from the other Docbook sections.


When implementing a command-line utility many concerns need to be implemented besides the primary tasks that it needs to do. In this blog post I have mentioned the following:


I tend to separate the command-line interface implementing the above concerns into a separate module/file (typically called main.c), unless the job that the command-line tool should do is relatively simple (e.g. it can be expressed in 1-10 lines of code), because I consider modularization a good practice and a module should preferably not grow too big or do too many things.


When I implement a toolset of command-line utilities, such as Disnix, I often see that these tools have many common parameters, common validation procedures and a common procedure displaying the tool version.

I typically abstract them away in a common module, file or library so that I don't find myself duplicating them making maintenance more difficult.

Creating good quality command-line tools is not straight forward. To make myself and other people that I happen to work with aware of it, I have written down some of the aspects that I take into consideration.

Although the command-line has some appealing properties, it is obviously not perfect. Some command-line tools are weird, may significantly lack quality and cannot be integrated in a straight forward way through pipes. Furthermore, many shells (e.g. bash) implement a programming language having weird features and counter-intuitive traits.

For example, one of my favorite pitfalls in bash is its behaviour when executing shell scripts, such as the following script (to readers that are unfamiliar with the commands: false is a command that always fails):


bash simply executes everything despite the fact that two commands fail. However, when I add the -e command line parameter, the execution is supposed to be stopped if any command returns a non-zero exit status:


Despite a number of oddities, the overall idea of the command-line is good IMO: it is a general purpose environment that can be interactive, programmed and extended with custom commands implemented in nearly any programming language that can be integrated with each other in a straight forward manner.

Meanwhile, now that I have made myself aware of some important concerns, I have adapted the development versions of all my free and open source projects to properly reflect them.