Today, it's my blog's first anniversary, so I thought this is a good opportunity to do some reflection about it.

So why have I started this blog in the first place? The main reason is that as a software engineer and researcher, I don't necessarily only write code or write academic papers:


The main purpose of my blog is to fill this gap with academic paper publishing. Apparently, it seems that some of my blog posts have raised quite some attention, which I'm very happy about. Moreover, some blog posts (like the .NET related stuff) also gave me some early feedback which helped me solving a problem which I was struggling with for a long time.

Writing for a blog

For some reason, I find writing blog posts more convenient than writing academic papers. In order to write an academic paper I have to take a lot of stuff into account next to the scientific contribution I want to make. For example:


Writing for my blog is actually much easier for me, because I don't have to spent so much time on these other issues next to the contribution I want to make. Furthermore, because I can link to earlier topics and I know my audience a bit, I don't have to explain the same things over and over again.

Another funny observation is the top 10 of most popular blog posts. The top 10 (at this time) is as follows:


My biggest surprise is the fact that the Amiga stuff is so popular. Actually, I have some fun projects that I'm working on, so if I can find any time for it, there may be more to report about.

It seems for me that it pays off to have blog, so hopefully next year there will be much more interesting things to report about. I have one more thing to say and that is: 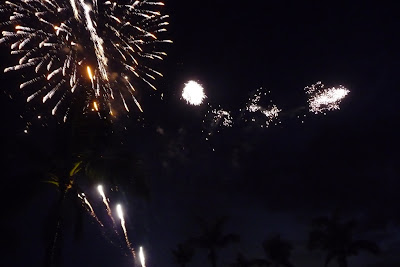 HAPPY NEW YEAR!!!!!!! (I took the fireworks picture above during the ICSE in Hawaii, just in case you wanted to know ;) )
Posted by Sander van der Burg at 11:52 PM No comments:

Email ThisBlogThis!Share to TwitterShare to FacebookShare to Pinterest
Labels: research

Techniques and lessons for improvement of deployment processes

So far, all my software deployment related blog posts were mostly about techniques implemented in Nix, NixOS and Disnix and some general deployment information.
In my career as a Masters student and PhD student, I have written quite a number of Nix expressions for many packages and I have also "Nixified" several large code bases of commercial companies to make it possible to use the distinct features of Nix to make software deployment processes reproducible and reliable.

However, for many systems it turns out that implementing Nix support (for instance, to allow it to be deployed by our Nix-based deployment tools) is more difficult, tedious and laborious than expected. In this blog post, I'm going to describe a number of interesting techniques and lessons that could improve the deployment process of a system, based on my experience with Nix and Disnix. Second, by taking these lessons into account, it also becomes easier to adopt Nix as underlying deployment system.

In this blog post I have listed some interesting lessons to improve the deployment process of complex systems based on my experience with Nix and related tools. These can be implemented in various deployment processes and tools. Furthermore, it becomes easier to adopt Nix related tooling by taking these lessons into account.

I also have to remark that it is not always obvious to implement all these lessons. For example, it is hard to integrate Visual Studio C# projects in a stricter deployment model supporting isolation, because the .NET runtime has no convenient way to address run-time dependencies in arbitrary locations. However, there is a solution for this particular problem, which I have described in an earlier blog post about .NET deployment with Nix.

UPDATE: I have given a presentation about this subject at Philips recently. As usual, the slides can be obtained from the talks page of my homepage.
Posted by Sander van der Burg at 3:45 PM No comments:

Email ThisBlogThis!Share to TwitterShare to FacebookShare to Pinterest
Labels: research

An evaluation and comparison of GoboLinux

In this blog post, I'm going to evaluate deployment properties of GoboLinux and compare it with NixOS. Both Linux distributions are unconventional because they deviate from the Filesystem Hierarchy Standard (FHS). Apart from this, GoboLinux shares the same idea that the filesystem can be used to organize the management of packages and other system components, instead of relying on databases.

The purpose of this blog post is not to argue which distribution is better, but to see how this distribution achieves certain deployment properties, what some differences are compared to NixOS and what we can learn from it. 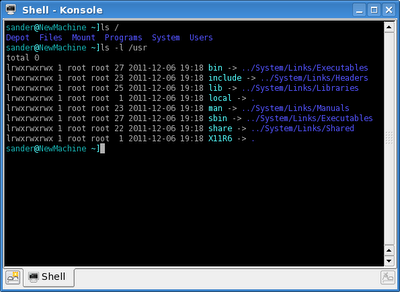 GoboLinux stores static parts of programs in isolation in the /Programs folder. The /System folder is used to compose the system, to store system configuration settings and variable data. /Files is used for storing data not belonging to any program. /Mount is used for accessing external devices such as DVD-ROM drives. The /Users folder contains home directories. /Depot is a directory without a predefined structure, which can be organized by the user.

GoboLinux also provides compatibility with the FHS. For example, the /usr and /bin directories are actually also present, but not visible. These directories are in fact symlinks trees referring to files in the /System directory (as you may see in the picture above). They are made invisible to end-users by a special kernel module called GoboHide.

Like NixOS, GoboLinux stores each package in a seperate directories, which do not change after they have been built. However, GoboLinux uses a different naming convention compared to NixOS. In GoboLinux every package uses the /Program/<Name>/<Version> naming convention, such as: /Programs/Bzip2/1.0.4 or /Programs/LibOGG/1.1.3. Furthermore, each program directory contains a Current symlink which points to the version of the component, that is actually in use. Some program directories also have a Settings/ directory containing system configuration files for the given package.

The use of isolated directories offers a number of benefits like NixOS:


In NixOS, however, every package name is an exact specification, because the component name contains an hash-code derived from all build-time dependencies to build the package, such as the compiler version, libraries and build scripts.

For example, in NixOS bzip2 may be stored under the following path: /nix/store/6iyhp953ay3c0f9mmvw2xwvrxzr0kap5-bzip2-1.0.5. If bzip2 is compiled with a different version of GCC or linked to a different version of glibc, it gets a different hash-code and thus another filename. Because no component shares the same name, it can be safely stored next to other variants.

Another advantage of the Nix naming convention is that unprivileged users can also build and install software without interfering with other users. If for example, a user injects a trojan horse in a particular package, the resulting component is stored in a different Nix store path and will not affect other users.

However, because of these exact dependency specifications, upgrades in NixOS may be more expensive. In order to link a particular program to a new version of a library, it must be rebuild, while in GoboLinux the library dependency can be replaced without rebuilding (although it may not guarantee that the upgraded version will work).

Of course, storing packages in separate directories does not immediately result in a working system. In GoboLinux, the system configuration and structure is composed in the /System directory.


Like NixOS, GoboLinux uses symlink trees to compose a system and to make the contents of packages accessible to end users.

Like NixOS, GoboLinux uses declarative specifications to build packages. GoboLinux calls these specifications recipes. Each recipe directory contains a file called Recipe which describes how to build a package from source code and a folder Resources/ defining various other package properties, such as a description and a specification of build-time and run-time dependencies.


An example of a recipe, describing how to build Lesstif, is shown above. Basically, for autotools based projects, you only need to specify the location where the source code tarball can be obtained, and some optional parameters. From this recipe, the tarball is download from the sourceforge web server and the standard autotools build procedure is performed (i.e. ./configure; make; make install) with the given parameters.

GoboLinux recipes and Nix expressions both offer abstractions to declaratively specify build actions. A big difference between those specifications, is the way dependencies are specified. In GoboLinux only nominal dependency specifications are used, which may not be complete enough, as explained earlier. In Nix expressions, you refer to build functions that build these dependencies from source-code and their build-time dependencies, which are stored in isolation in the Nix store using hash codes.

In GoboLinux, the Compile tool can be used to build a package from a recipe. Builds performed by this tool are not entirely pure, because it looks for dependencies in the /System/Links directory. Because this directory contains all the installed packages on the system, it may be possible that the build of a recipe may accidentally succeed when a dependency is not specified, because it can be implicitly found.

In order to make builds pure, GoboLinux provides the ChrootCompile extension, which performs builds in a chroot environment. ChrootCompile tool bind mounts the /Program directory in the chroot environment and creates a small /System only containing symlinks to the dependencies that are specified in the recipe. Because only the specified dependencies can be found in /System/Links directory, a build cannot accidentally succeed if a dependency has been omitted.

Both Nix and ChrootCompile have the ability to prevent undeclared dependencies to accidentally succeed a build, which improves reproducibility. In Nix, this goal is achieved differently. In Nix, the environment variables in which a build is performed are completely cleared (well not completely, but almost :-) ), and dependencies which are specified are added to the PATH and other environment variables, which allow build tools to find the dependencies.

Furthermore, Nix also binds dependency relationships statically to the executables (e.g. by modifying the RPATH header in an ELF binary), instead of allowing binaries to look in global directories like: /System/Links, which GoboLinux executables do. Although, GoboLinux builds are pure inside a chroot environment, their run-time behaviour may be different when a user decides to upgrade a version of its dependency.

In this blog post I did an evaluation of GoboLinux and I compared some features with NixOS. In my opinion, evaluating GoboLinux shows a number of interesting lessons:


GoboLinux and NixOS have a number of similar deployment properties, because of their unorthodox filesystem organization, but also some differences and limitations. The following table summarizes the differences covered in this blog post:


The general conclusion of this blog post is that both distributions achieve better deployment properties compared to conventional Linux distributions, by their unorthodox filesystem organisation. Because of the purely functional deployment model of the Nix package manager, NixOS is more powerful (and strict) than GoboLinux when it comes to reliability, although this comes at the expense of extra rebuild times and additional disk space.

The only bad thing I can say about GoboLinux is that the latest 014.01 release is outdated (2008) and it looks like 015 is in progress for almost three years... I'm not sure if there will be a new release soon, which is a pity.

And of course, apart from these deployment properties, there are many other differences I haven't covered here, but that's up to the reader to make a decision.

I'm planning to use these lessons for a future blog post, which elaborates more on techniques for making software deployment processes more reliable.
Posted by Sander van der Burg at 11:16 PM 2 comments: