A while ago, I have written a blog post about my IFF file format experiments in which I have developed a collection of libraries and tools capable of parsing and displaying two IFF file format applications. Some time before that, I have developed a Nix function capable of building software for AmigaOS allowing me to easily backport these experimental software packages to AmigaOS.

The development of these experimental packages were dormant for quite some time, but recently I was able to find some time to do some improvements. This time I have updated the Amiga video emulation library to support a few new features and to more accurately emulate an Amiga display.

Differences between Amiga and PC displays


So why is emulation of Amiga video modes necessary? Emulation of Amiga graphics hardware is required because pixels are encoded differently than "modern" PC hardware, resolutions have different semantics, and Amiga hardware has a few special screen modes to "squeeze" more colors out of the amount of available color registers.

However, older PC hardware, such as those used during the DOS era, were often not powerful enough to address every pixel's color value individually, mainly due to memory constraints. Many classic DOS games used a 320x200 video resolution with a color palette consisting of 256 color values. Each pixel was encoded as a byte referring to an index value of a palette. This encoding is also known as chunky graphics.

System resources in the Amiga era were even more scarce, especially during its launch in 1985. The original graphics chipset was only capable of storing 32 color values in a palette, although there were a few special screen modes capable of squeezing more colors out of the 32 configurable ones. It also used a different way of encoding pixels, probably to make storage of graphics surfaces as memory efficient as possible.

In Amiga chipsets pixels are encoded as bitplanes rather than bytes. When using bitplane encoding, an image is stored multiple times in memory. In every image occurence, a bit represents a pixel. In the first occurence, a bit is the least significant bit of an index a value. In the last occurence a bit is the most significant bit of an index value. By adding all the bits together we can determine the index value of the palette to determine a pixel's color value. For example, if we would encode an image using 16 colors, then we need 4 bitplane surfaces.


As explained earlier, due to memory constraints, Amiga graphics use a palette of 32 configurable color values (or 256 colors when using the newer AGA chipset is used). Each pixel refers to an index of a palette instead of a color value of its own.

The original chipset color values are stored in 16-bit color registers in which every color component consists of 4 bits (4 bits are unused). The newer AGA chipset as well as VGA graphics use 8 bits per color component. 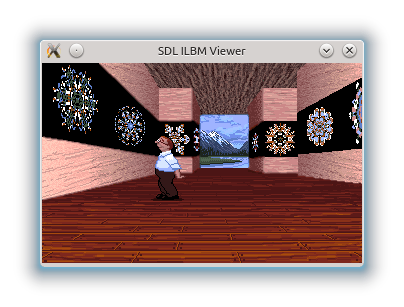 Furthermore, the Amiga video chips have special screen modes to squeeze more colors out of the amount of color registers available. The Extra Half Brite (EHB) screen mode is capable of displaying 64 colors out of a predefined 32, in which the last 32 colors values have half of the intensity of the first 32 colors. The above screenshot is an example picture included with Deluxe Paint V using the EHB screenmode. A closer look at the floor in the picture look may reveal to you that an EHB palette is used.

The Hold-and-Modify (HAM) screen mode is used to modify a color component of the previous adjacent pixel or to pick a new color from the given palette. This screen mode makes it possible to use all possible color values (4096) in one screen with some loss of image quality. 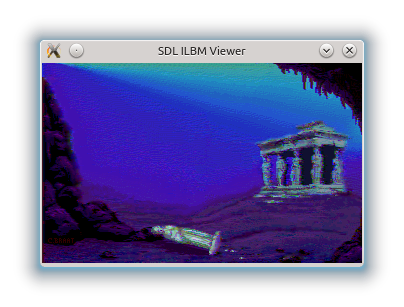 The above screenshot is an example image included with Deluxe Paint V using HAM screenmode to utilise many more colors than the amount available color registers. A closer look at the image very may reveal that it has some quality loss because of the limitations of HAM compression.

To be able to properly display an image on a PC we need to convert 12-bit color values to 32-bit color values. Moreover, we also have to calculate each pixel's color value when HAM screen modes are used and convert the image to true color graphics, since a picture using HAM mode may use more than 256 colors. 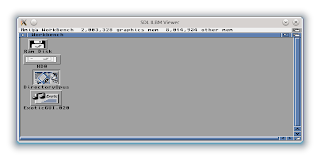 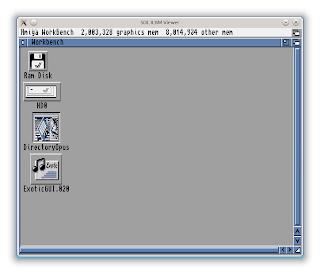 Because of these differences, we may observe odd results in some cases when we convert an Amiga pixel surface to a chunky/RGB pixel surface. For example, a non-interlaced high resolution image looks twice as wide on a PC display than on an Amiga display, as can be seen in the left picture above, which contains a pixel-by-pixel conversion of a the Workbench screenshot.

To give it the same look as an Amiga display, we must correct its aspect ratio by doubling the amount of scanlines on the PC display, which is done in the right screenshot. People who have used the Amiga Workbench will immediately notice that this image is much closer to what can be seen on a real Amiga.

A library for performing conversions of Amiga display surfaces


While writing my previous blog post, I have developed a library (libamivideo) capable of automatically converting Amiga bitplane surfaces to chunky/RGB pixel surface and vice versa. In the latest release, I have added the following features and improvements:


The library can be obtained from my GitHub page. I have also updated the SDL-based ILBM viewer (SDL_ILBM) as well as the native AmigaOS ILBM viewer (amiilbm) to use the new library implementation.

Posted by Sander van der Burg at 11:36 PM No comments: