In a couple of older blog posts, I've reported about my experiences with companies, such as the people to whom I talked to at the LAC conference and my job searching month. One of the things that I have noticed is that nearly all of them were doing "Agile software development", or at least they claim to do so. 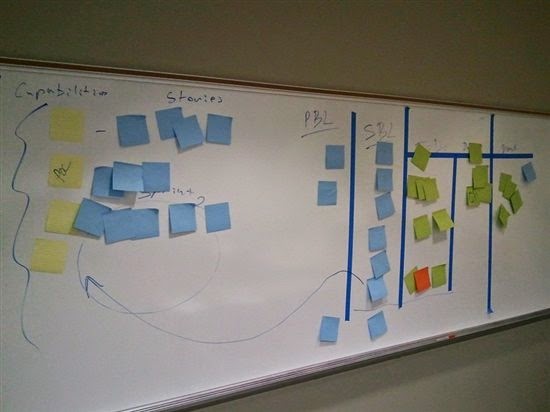 At the LAC conference, Agile seemed to be one of the hottest buzzwords and every company had its own success story in which they explained how much Agile methodologies have improved their business and the quality of the systems that they deliver.

Although many companies claim to be Agile, I still have the impression that the quality of software systems and the ability to deliver software in time and within the budget haven't improved that much in general, although there are some exceptions, of course.


I'm not an expert in Agile software development. One of the first things I wanted to discover is what "Agile" actually means. My feeling says that only a few people have an exact idea, especially non-native English speakers, such as people living in my country -- the Netherlands. To me, it looks like most of the developers with a Dutch mother tongue use this buzzword as if it's something as common as ordering a hamburger in a restaurant without consciously thinking about its meaning.

According to the Merriam Webster dictionary, Agile means:


1
: marked by ready ability to move with quick easy grace <an agile dancer>
2
: having a quick resourceful and adaptable character <an agile mind>


The above definition is a bit abstract, but contains a number of interesting keywords. To me it looks like if some person or object is Agile, then it has a combination of the following characteristics: quick, easy, resourceful, and adaptable.

Why do we want/need to be Agile in software development?


It's generally known that many software development projects partially or completely fail, because of many reasons, such as:

These issues are caused by many factors, such as:


Ideally, in a software development project, these problems should be prevented. However, since this ideal is hard to achieve, it is also highly desirable to be able to respond to them as quickly as possible without too much effort, to prevent the corresponding problems to grow out of hand. That is why being Agile (e.g. quick, easy, resourceful, and adaptable) in software development is often not only wanted, but also necessary, in my opinion.


The "definition of Agile" has been "translated" to software development by a group of practitioners, into something that is known as the Agile manifesto. This manifesto states the following:

We are uncovering better ways of developing software by doing it and helping others do it. Through this work we have come to value:


The Agile manifesto looks very interesting, but when I compare it to the definition of Agile provided by the Merriam Webster dictionary, I don't see any of its characterizing keywords (such as adaptable and easy) in the text at all, which looks quite funny to me. The only piece that has some kind of connection is Responding to change (that has a connection to adaptable), but that is pretty much everything I can see that it has in common.


This observation makes me wonder: How is the Agile manifesto going to help us to become more agile in software development and more importantly, how should we interpret it?


From my perspective, the Agile manifesto does not say that the emphasis should lie on the left items only. In fact, I think the right items are also still important. However, in situations where things are unclear or when pressure arises, then the item on the left should take precedence. I'm not sure if this is something the authors of the manifesto have intended to communicate though.

For example, while developing a certain aspect of a system, it would still make sense to me to write their corresponding requirements down so that everyone involved knows about it. However, writing every possible detail down often does not make sense because they are typically not known or subject to change anyway. In these kind of situations, it would be better to proceed working on an implementation, validate that with the stakeholders and refine the requirements later.

Same thing, for example, applies to customer collaboration (in my opinion). An agreement should be made, but of course, there are always unforeseen things that both parties did not know of. In such situations it is good to be flexible, but it should not come at any price.


What is exactly Agile about finding a right balance between these items? I think in ideal situations, having a formalized processed that exactly describes the processes, documentation that catches everything, a solid contract that does not have to be changed and a plan of which you know that works is the quickest and easiest path to get software implemented.

However, since unpredictable and unforeseen things always happen, these might get in your way and you have to be flexible. In such cases, you must be adaptable by giving the items on the left precedence. I don't see, however, what's resourceful about all of this. :-)

So is this manifesto covering enough to consider software development "Agile" if it is done properly? Not everybody agrees! For example, there is also the More Agile Manifesto that covers organisations, not teams. Kent Beck, one of the signatories of the Agile manifesto, wrote an evolved version. Zed Shaw considers it all to be nonsense and simply says that people should do programming and nothing should get in their way.

I'm not really a strong believer in anything. I want to focus myself on facts, rather than on an idealism.


As I have explained earlier, nearly all the companies that I visited during my job searching month as well as my current employer have implemented (or claim to have implemented) Scrum in their organisation. According to the Scrum guide, Scrum is actually not a methodology, but rather a process framework.

In a process implementing Scrum, development is iterative and divided into so-called sprints (that take up to 2-4 weeks). At the end of each sprint an increment is delivered that is considered "done". Each sprint has the following activities:

Teams typically consist of 3-9 persons. Scrum only defines three kinds of team member roles, namely the product owner (responsible for maintaining the product back log and validating it), the Scrum master (who guards to process and takes away anything that blocks developers) and developers.

The Scrum guide makes no distinction between specific developer roles, because (ideally) every team member should be able to take over each other's work if needed. Moreover, teams are self-organizing meaning that it's up to the developers themselves (and nobody else) to decide who does what and how things are done.


I have encountered quite a few people saying "Hey, we're doing Scrum in our company, so we're Agile!", because they appear to have some sort of a process reflecting the above listed traits. This makes me wonder: How is Scrum going to help and what is so agile about it?

In my opinion, most of its aspects facilitate transparency (such as the four activities) to prevent that certain things to go wrong or that too much time is wasted because of misunderstandings. It also facilitates reflection with the purpose to adapt and optimize the development process in future sprints.

Since Scrum only loosely defines a process, the activities defined by it (sort of) make sense to me, but also deliberately leaves some things open. As I have mentioned earlier, a completely predictable process would be the quickest and easiest way to do software development, but since that ideal is hard to achieve because of unpredictable/unforeseen events, we need some flexibility too. We must find a balance and that is what Scrum is (sort of doing) by providing a framework that still gives an adopter some degree of freedom.

A few things that came into my mind with regards to a process implementation are:


In practice, I have not seen that many people consciously thinking about the implementation of certain aspects in a Scrum process at all. They are either too much concerned with the measurable aspects of a process, (e.g. is the burndown chart, that reflects the amount of work remaining, looking ok?), or the tools that are being used (e.g. should we add another user story?).

IMHO, Scrum solves and facilitates certain things that helps you to be Agile. But actually being Agile is a much broader and more difficult question to answer. Moreover, this question also needs to be continuously evaluated.


In this blog post, I have written about my experiences with Agile software development. I'm by no means an expert or a believer in any Agile methodology.

In my opinion, what being agile actually means and how to accomplish this is a difficult question to answer and must be continuously evaluated. There is no catch-all solution for being it.


I gained most of my inspiration for this blog post from my former colleague's (Rini van Solingen) video log named: "Groeten uit Delft" that covers many Scrum and Agile related topics. I used to work for the same research group (SERG) at Delft University of Technology.