It's probably already very obvious that NixOS uses the Nix package manager for installing, upgrading and removing software components. In fact, except for end-user software such as Mozilla Firefox and OpenOffice.org, development tools such as GCC, Binutils, also all operating system parts such as the Linux kernel, system configuration files and kernel modules are all managed by the Nix package manager and stored in isolation in the Nix store. 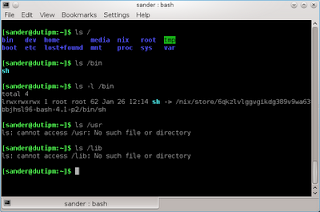 Because of the fact that Nix stores all packages in a special directory: /nix/store, the NixOS distribution does not have standard FHS directories such as: /usr and /lib and only a minimal /etc and /bin. The /bin directory only contains a symlink: /bin/sh pointing to the bash shell. This is required in order to make glibc's system() function working properly. I have uploaded a screenshot (seen above) in which a terminal is shown, listing the directory contents of the root filesystem, /bin folder and some other files. As you may notice, certain directories commonly found on other distributions don't exist, and the /bin/sh points to the bash shell which is also stored somewhere in the Nix store.

The fact that Nix is used instead of a conventional package manager such as RPM or dpkg, does probably not sound so exciting to most users. Actually, NixOS is more then just a Linux distribution managed by Nix. The main thing that sets NixOS apart from conventional Linux distributions is that system configurations are also configured with declarative specifications just Nix like packages. Instead of manually installing packages and manually editing configurations files, such as an Apache web server configuration, everything is configured from a single declarative specification, invoking functions which generate configuration files and install required packages.


The code fragment above shows an example of a NixOS configuration. As you may notice, this configuration file contains all kinds of settings for a particular system, such as the MBR partition for the GRUB bootloader, filesystems (such as the root and swap partition), system services (OpenSSH, Apache Webserver and X.Org configured to use the KDE desktop and the KDM login manager). Also, system packages are defined here such as Mozilla Firefox and Midnight Commander, which are automatically in the PATH of all users and also appear automatically in the KDE menu if desktop files are included. 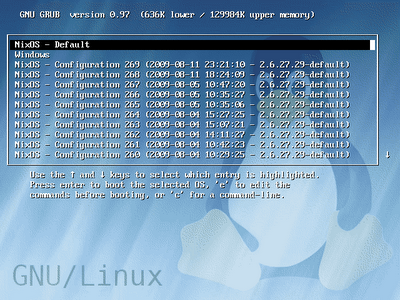 Maybe you have become interested in trying out NixOS after reading this. ISOs can be obtained from the NixOS website: http://nixos.org/nixos. In NixOS quite a number of packages are supported. We also have end-user software available and the KDE desktop. Keep in mind that NixOS is an experimental Linux distribution, which may not offer everything you need. We only have a small community of ~25 developers maintaining it.

If you find some concepts of NixOS useful but you don't want to switch, you can also use the virtualization features of NixOS to automatically generate virtual machines running a particular NixOS configuration. You can even do this on regular Linux distributions supporting KVM having the Nix package manager installed.

One point of criticism I always receive is about the fact that we don't edit configuration files manually. I have to admit that this is a bit inconvenient, if you want to try out a particular feature of a service. But manually editing stuff becomes very inconvenient in a distributed setting. Probably everyone agrees that it is unfeasible in case of a configuration change, to manually update the configurations of every affected machine. One of the things we investigate in the PDS research project is expanding the Nix deployment vision to distributed systems.