As I have mentioned in my previous blog post (in which I reflected over the last year), the Amiga is still not quite dead yet and (for some reason) my blog post about my good ol' Amiga has attracted much more visitors than I expected. In fact, for a long time this was the most interesting story I have written, while most of my other blog posts are mostly about the research that I'm currently doing.

Nowadays, there is still an active community developing Amiga software. For that reason, I have decided to pay some attention to this subject once more. This time I'm going to make it a bit more related to the research I'm currently doing. If you are curious to see how I achieve that goal, please read on...

One of the interesting efforts done in the past is a project called Geek Gadgets, in which the GNU toolchain and many other UNIX utilities are ported to AmigaOS. You could see this effort as something similar to Cygwin, providing a UNIX environment and GNU toolchain on Microsoft Windows.

Interesting packages included in this project are:


These tools make it possible to port Unix-like applications to AmigaOS as well as writing native AmigaOS applications, using development tools commonly found on free software systems, such as Linux.

Quite a number of applications are ported using this toolset such as TeX, Emacs, the X Window System and SDL, a library which is commonly used on Linux to develop games and other multimedia applications.

Below, I have included a screenshot showing the Amiga Workbench and an Amiga Shell. In this Amiga shell, I have opened a Korn Shell session to show the contents of the Geek Gadgets toolset and the version of the GCC compiler. 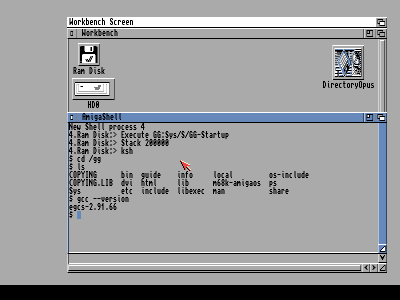 As you may notice in the screenshot above, the /gg directory is the Geek Gadgets root directory in which a typical UNIX-like filesystem hierarchy is defined with its associated files and utilities.

Like Cygwin, the ixemul kernel also provides a UNIX to native filesystem mapping, by defining assignments as root directories. For example the /gg directory represents the GG: assignment in which the Geek Gadgets files are stored.

Deploying a Geek Gadgets environment was a bit trickier than I expected:


Most importantly, my research as a PhD student is about software deployment in which I try to deal with such inconveniences. For Amiga readers not knowing anything about it, one of our key aspects is the Nix package manager, which we use to build software components from declarative build specifications. Furthermore, Nix has several distinct features such as the ability to store components in isolation, atomic upgrades and rollbacks and garbage collector which safely removes components no longer in use.

Nowadays, I use the Nix package manager for virtually everything that I develop and I have to compile, because it stores all builds isolated and it never pollutes my system. Furthermore, I can also easily use the Nix package manager to build several variants of the same package (e.g. for i686-linux and x86_64-linux), just by modifying several build parameters in the Nix expression for that particular package.

So an interesting question that I have raised to myself is: "Can I use my research about software deployment to deal with these deployment inconveniences of Geek Gadgets on AmigaOS?".

An answer that you probably would expect me to give is that I have ported the Nix package manager to AmigaOS, but unfortunately that isn't possible because Nix requires much more memory than an Amiga has. Furthermore, the ixemul library does not completely support the POSIX API and does not support symlinks, which makes it impossible to run the Nix package manager properly.

Instead, I have developed a Nix function, which should be invoked on a Linux machine. This function launches UAE, the Ultimate Amiga Emulator, to perform a build and stores the build result in the Nix store of the host system. To develop this Nix function I had to create a basic disk image and a function that starts UAE with this disk image in which the actual build is performed. 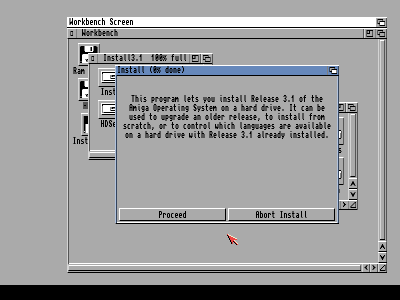 Creating a basic disk image is a straightforward process:


Installing the Geek Gadgets environment is a little trickier though:

Now that we have a basic disk image containing the Amiga Workbench and the Geek Gadgets utilities, we need to write a Nix function that automatically performs the build steps. I will list pieces of the code of this Nix function here, with some explanation.

The AmigaOS build function, takes 4 arguments where 1 argument is optional:


The name parameter specifies the name of the component, which also appears in the resulting Nix store path. The src parameter is used to specify the source code that must be compiled. This parameter could refer to a tarball, or a directory containing source code. You could also bind this parameter to a function, such as fetchurl to remotely obtain a source tarball. The buildCommand parameter is a string which specifies how the source code can be built. The buildInputs parameter can be used to install additional packages into the Geek Gadgets environment, such as libraries or other build tools which aren't included in the basic disk image.

The next line imports all the Nix package build functions into the scope of our AmigaOS build function, so that we can conveniently access UAE and other utilities:


We also need to specify where we can find the disk image containing the Workbench and Geek Gadgets. The UAE emulator also needs a kickstart ROM image. The following code fragment specifies where to find them (you need to replace these paths to match your situation):


The following lines invoke the stdenv.mkDerivation function, which we need to specify how we can actually perform a build. The following code fragment inherits the name from our function header. Furthermore, it adds the UAE emulator in our environment so that we can boot our disk image and perform the compilation. We need procps to kill the emulator, once the build has finished:


The remainder of the function specifies how the build should be performed. As we're not allowed to mess up the original base image (it's read-only anyway during a Nix build), we need to create a new one in our temp directory of our build. Fortunately, most parts of the AmigaOS filesystem can be used in read-only mode, so we only need to symlink these system directories. The following code fragment creates symlinks to all static AmigaOS directories:


The Geek Gadgets environment however, must be copied to our new temporary hard drive, because we may need to install other packages in this environment. Additionally, we need to fix the permissions of the copied GG directory, because in the Nix store it has been made read-only and we require a writeable GG directory:


If we have any build inputs (such as library packages), we need to unpack them into the Geek Gadgets environment:


The next step is copying the source code into a location in which a build can be performed. For this purpose we create a temp T directory in our AmigaOS filesystem. If the source code is a directory, we need to strip the hash off it and we need to make it writable again:

We can't directly invoke the build instructions, because we also have to determine whether a build has succeeded or failed. The following code fragments creates an additional script called: build.sh, which invokes the buildinstructions.sh script. After the build instructions script has finished, it determines whether it has succeeded or failed and writes the status into a file called done which is stored in the resulting Nix store path:

We now configured a bootable disk image, which automatically performs a build. The next step is to provide a number of settings to UAE so that our temporary disk image can be used and that a build is performed properly:


The code fragment above defines our temporary build directory as HOME directory (In a Nix build environment this variable is set to a non-existent path: /homeless-shelter in order to remove side effects). Furthermore, we generate a UAE configuration file with the following properties:


After configuring UAE, we have to run it. Since UAE is a GUI application requiring a X11 display server, we have to specify the DISPLAY environment variable:


There is no way to shut UAE down from an Amiga session, so we wait until we see the done file in our output directory. Once this file exists we kill the UAE process:


After executing all the previous steps, the build has either succeeded or failed. If a build has succeeded, we can remove the done file, as well as some temp files created by UAE:

The following code fragment shows how this Nix function can be used to build GNU Hello for AmigaOS:


The expression above looks almost identical to the regular Nix expression building GNU Hello. Important to point out is that we store the output of the GNU Hello world in the /OUT directory, which corresponds to the OUT: drive. The GNU Hello build apparently requires help2man to generate a manual page. This tool is not present in our environment, and to make the build succeed I've added || true to the make instruction, so that it always succeeds. By running the following command line instruction:


The GNU Hello component gets build for AmigaOS, which looks like this: 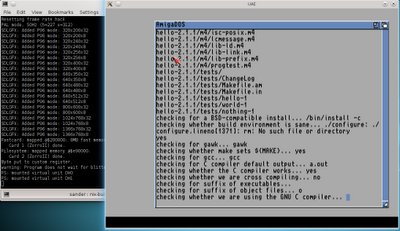 I have also tried compiling a native AmigaOS application, which creates a very simple Intuition GUI window. I wrote the following test program for this purpose: 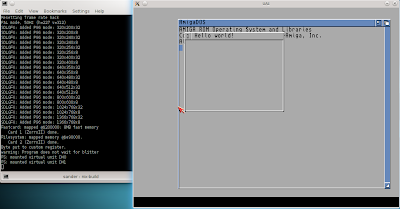 So apparently it works fine!

This blog post covers one of the craziest experiments I have done so far. I have developed a Nix function, which builds software for AmigaOS using the Geek Gadgets toolset by creating a disk image and by using UAE.

After reading this blog post (in case you're still interested :-) ), you may wonder if I actually have a real use case for this. The answer is: YES, although I'm not going to reveal what it is yet. Probably it will take a while, because I currently don't have that much spare time for fun projects like these.

I have decided not to commit this function to Nixpkgs, because it's quite hacky and it depends on stuff (like the Amiga Workbench) which I cannot distribute freely. It's probably not so hard to recreate this function yourself. You can freely use the code I have written under the MIT license.

UPDATE: I didn't expect this, but it seems that there are people around who actually want to use this. I have recently put some effort in it to make it a bit usable. The source code can be found on the nix-amigaosenv GitHub page, which contains updated instructions. Furthermore, I have made some enhancements, so that builds can be performed much faster and cheaper.