As some of you may know (and some others probably don't :-) ), I have visited several conferences, which I'm required to attend as part of my job as PhD student. Most of the conferences are academic conferences where I have to present papers that I publish. In contrast to many other research fields - in software engineering - we typically publish at conferences instead of journals.

In this blog post, I'm going to list the conferences I have visited the past few years and I'm going to share some experiences. The reason that I have written this blog post is basically because of what I have written earlier about software engineering fractions. It's not to have a rant about these conferences, but to share my personal experiences about the topics, audience, peculiarities and other traits, because I think it's important to know how to reach several types of audiences instead of living on an isolated island.

The conference experiences here are in chronological order. In order to keep blog posts short, I start with the first two years (2008-2009):


This is the first academic event I have ever attended. DSM is a workshop about Domain-Specific Modeling and is typically co-located with OOPSLA (nowadays known as SPLASH). I have attended the 2008 edition in Nashville, Tennessee, USA, which was also my first trip to the USA.

I didn't have to present anything here, but the main reason of attending was that students were allowed to attend any co-located event at OOPSLA for free and one of my colleagues had to present a paper there.

The workshop covers short papers about both theoretical and practical aspects of domain specific modeling. I have seen many kinds of submissions, ranging from simple ideas to a number of tools that have a significant practical use. I have even seen some submissions that me and my colleagues still laugh about today (including their paper).

One of the nice aspects of this workshop is that there is a lot of room for discussion with the attendants and a relatively low barrier of getting your idea published (this is both positive as well as a negative thing).

The attendants of this workshop are mostly academic people, but also quite a number of industry people, showing industrial applications. Below I have included a picture taken of the attendants (people who know me will surely recognise me :-) )


HotSWUp is the second academic event I have attended. HotSWUp is a cross-disciplinary workshop about software upgrades in any sub field, such as programming languages, operating systems, distributed systems and so on. This event was also co-located with OOPSLA and held in Nashville.

In this workshop, I had to present my first research paper, covering distributed atomic upgrades, an important aspect of my masters thesis.

HotSWUp was a very great workshop and a great experience for me. There were many nice papers covering great ideas, such as distributed upgrades, package management upgrades and how to safely mirror software components with untrusted parties. Even though many of these papers are not directly applicable to my research, they still have a fair amount of practical usage that I liked very much.

I received interesting questions, suggestions and feedback. Furthermore, there was also a lot of room for discussion that gave me many interesting ideas and several new research directions.

I have also met a number of interesting people close to my research. I met two "competitors" from the Mancoosi project (one of them is now the current Debian project leader), who also investigate package management related issues. We had a very nice opportunity to get to acquainted and share ideas about package management. I also met two other people who did similar kind of research with distributed systems. 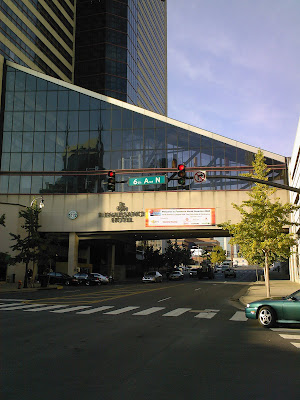 OOPSLA is the first academic conference I have attended (which was basically the host conference of the two previous workshops). Actually, OOPSLA was the only conference I knew about before I started my PhD and I very much liked the fact that I was able to attend it. Moreover, another colleague of mine had to present a full paper there and several others had a poster submission about WebDSL.

The papers of OOPSLA were mostly about practical aspects of Object-Oriented programming languages or related issues, such as garbage collection. There were quite a number of interesting papers showing good practical usage, such as the fact that using inverse lookups is better way of refactoring code. I saw an interesting paper using Robocode as a case-study, to which I was addicted when I started learning programming in Java.

There were also some presentations that were a bit hard to follow. For example, I still remember this presentation showing ovals with curly lines attached to it. When I saw those figures it reminded me of something totally different (which was probably not something that the presenter has intended :-) )

Apart from attending presentations, I also attended two tutorials, which were also free for students. I learned a thing or two about the Scala programming language, which combines object-oriented, functional programming and several other concepts in a new programming language which builts on top of the Java virtual machine. I also did a Smalltalk tutorial involving the Squeak implementation, which can also be used to develop web applications in Smalltalk.

Nowadays, OOPSLA no longer specifically focuses itself on object-oriented programming languages anymore. It's even not focused on programming languages, but on software engineering in general. To reflect the broadened scope, the new name of the conference is SPLASH: Systems, Programming, Languages and Applications: Software for Humanity.


FOSDEM was the next and a non-academic that I have visited. I was not required to visit it nor I had to present something. The main reason of attending it, was because I have always been involved with free and open source software.

FOSDEM is the biggest free and open-source event in Europe in which virtually every well known free and open-source project is represented, such as the X Window System, the Linux kernel, KDE, Mozilla, GNOME etc. FOSDEM is always held in Brussels at the campus of the Université libre de Bruxelles and can be visited by anyone interested for free (gratis).

When I arrived there for the first time, I was actually a bit "surprised" about the conference venue (the quality of the buildings were a bit "different" than I expected, after the impression I got when looking at their website :-) ). 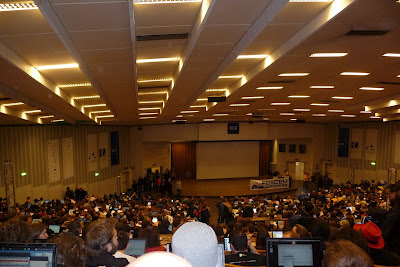 I also noticed that there were an overwhelming amount of attendants. At the keynote presentation, the entire Janson auditorium is completely filled with free and open source enthusiasts, as shown in the picture above. Some of them were really, really enthusiastic about the stuff they are working, as may see in the picture when looking at the headgear of some of the attendants.

Apart from a filled Janson auditorium room, it was also very difficult to move from one room to another or to look for somebody you know, because the hallways were always full of people.

The quality of the talks is -- as with many conferences -- of varying quality. I liked the talks about GEM/KMS and Ext4. There were also a number of talks, that were hard to follow and not well prepared. In contrast to academic conferences, where the session chair typically has a question for you (when nobody else has one), here at FOSDEM, the session chair has no mercy and immediately announces the next speaker. 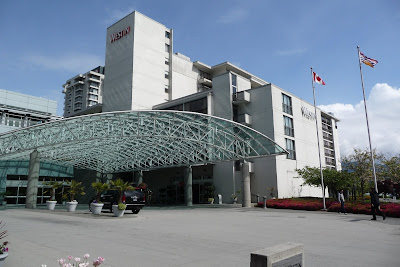 ICSE was the second top general software engineering conference I have attended. The main reason of attending it was because I had to present a paper at the co-located cloud computing workshop.

This conference was held in Vancouver, British Columbia, Canada and my visit was actually a bit special, as it was the first time for me to travel by plane alone and to travel such a long distance. :-)

The ICSE conference is a very broad conference covering topics in the entire software engineering spectrum, ranging from requirements engineering, testing, model checking and collaboration. Although software deployment is also listed on their call for papers, I haven't encountered any papers covering this subject in the last few years, unfortunately.

This years' ICSE edition had a very good atmosphere and I've met quite a number of interesting people there as well as some familiar ones from OOPSLA and HotSWUp. One of the papers presented there resulted in a collaboration many years later.

I also had to cheer for my former colleague: Ali Mesbah who presented his paper: 'Invariant-Based Automatic Testing of Ajax User Interfaces' for which he won the ACM SIGSOFT Distinguished paper award.

The social event was held at the Vancouver Aquarium and included a nice show with dolphins. Apart from the conference, I also took a few days off to explore the environment and I went to many interesting places, such as Stanley Park, Dr. Sun-Yat Sen Garden and Granville Island. 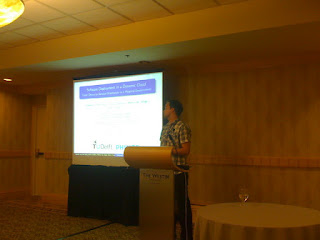 The ICSE Cloud workshop was the last event I have attended in 2009 in which I had to present a paper. The picture above, is taken by Jan S. Rellermeyer who also attended this workshop and HotSWUp, which I have described earlier.

Apart from a very good ICSE experience, the ICSE cloud shop was also a very nice workshop, with lots of discussions. Another important aspect was the high industry participation degree and especially the first keynote, given by somebody from Amazon, the company who basically pioneered the 'cloud computing' term.

Although I have to admit that the paper I had to present there was not one of my strongest contributions, it was actually quite well received there. Furthermore, for some unknown reasons, it also my most downloaded and cited paper.


This blog post reports about my conference experiences from the begin period of my career as a PhD researcher. In a future blog post I'll report about the next years, so stay tuned...

Email ThisBlogThis!Share to TwitterShare to FacebookShare to Pinterest
Labels: academia