Recently, I have set up a continuous integration facility at work, because we think that there is a need for such a facility.

While developing software systems, there are all kinds of reasons that may (potentially) break something. For example, by committing a broken piece of source code to a master repository or by upgrading one its dependencies, such as a library, to an incompatible version.

All these potentially breaking changes may result in a product that behaves incorrectly, which may not be delivered in time, because there is usually a very large time window in which it's not known if the system still behaves correctly. In such cases, it is a quite an effort to get all bugs fixed (because the effort of fixing every bug is cumulative) and to predict how long it will take to deliver a new version.

A solution for this is continuous integration (CI) or daily builds -- a practice in which all components of a software system are integrated at least once every day (preferably more often) and automatically verified by an automated build solution reporting about the impact of these changes as quickly as possible. There are many automated integration solutions available, such as Buildbot, Jenkins, Tinderbox, CruiseControl, and Hydra.


As some of you may know, I have written many articles about Nix and their applications on this blog. One of the applications that I have mentioned a few times, but didn't cover in detail is Hydra, a Nix-based continuous integration facility.

For people that know me, it's obvious that I have picked Hydra, but apart from the fact that I'm familiar with it, there are a few other reasons to pick Hydra over other continuous integration solutions:


Hydra is composed of several components. Obviously, Nix is one of them and does the majority of the work -- it's used to take job definitions specified in the Nix expression language and to execute them in a reliable and reproducible manner (which is analogous to building packages through Nix). Moreover, it can delegate job executions to machines in a network.

Besides Nix, Hydra consists of three other major components:


The following screenshot shows the entry page of the Hydra web front-end showing an overview of projects. On the highest level, every job that Hydra executes belongs to a certain project: 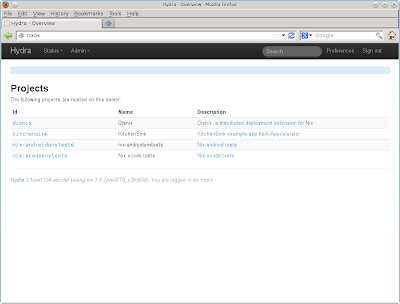 Administrators are free to choose any name and description of a project. Projects can be created, edited and deleted through the Hydra web interface. In this example, I have defined four projects: Disnix (a tool part of the Nix project which I have developed), the Nix android test case, the Nix xcode test case, and KitchenSink -- a showcase example for the Titanium SDK, a cross-platform mobile development kit.

Clicking on a project will show you its jobsets.


Every project contains zero or more jobsets. A jobset contains one or more jobs that execute something, typically a build or a test case. The following screenshot shows you the jobsets that I have defined for the nix-androidenvtests project: 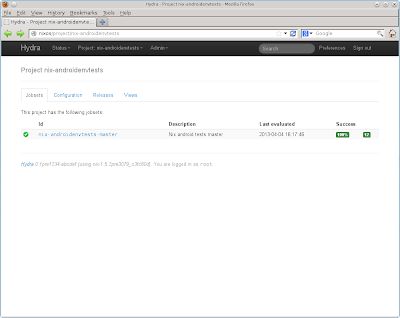 As we can see, we have defined only one jobset, which regularly checks out the master Git repository of the example case and builds it. Jobsets can be defined to build from any source code repository and can have any name. Quite frequently, I use jobsets to define sub projects or to make a distinction between branches of the same repository, e.g. it may be desirable to execute the same jobs on a specific experimental branch of a source code repository.

In the Disnix project, for example, I define jobsets for every sub project: 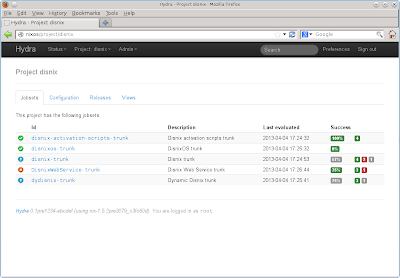 To create jobsets, we have to perform two steps. First, we must define a jobset Nix expression and store it in a source code repository, such as a Git repository or on the local filesystem. The nix-androidenvtests-master jobset expression looks as follows:

Functions in a jobset expression are used to define its variation points. For example, in our above expression we have only two of them -- the nixpkgs parameter refers to a checkout of the Nixpkgs repository, that contains a collection of common packages, such as compilers, linkers, libraries, end-user software etc. The system parameter refers to the system architecture that we want to build for, which can be (for example) 32-bit Linux machines, 64-bit Linux machines, 64-bit Mac OS X and so on.

Nix expressions defining packages and Nix expressions defining jobsets are quite similar. Both define a function (or functions) that build something from given function arguments. They both cannot be used to build something directly, but we must also compose the builds by calling them with the right function arguments. Function arguments specify (for example) which versions of packages we want to use and for what kind of system architectures we want to build. For ordinary Nix packages, this is done in the all-packages.nix composition expression. For jobsets, we use the Hydra web interface to configure them.

In the following screenshot, we configure the nix-androidenvtests jobset (done by picking the 'Create jobset' function from the Projects menu) and their parameters through the Hydra web interface: 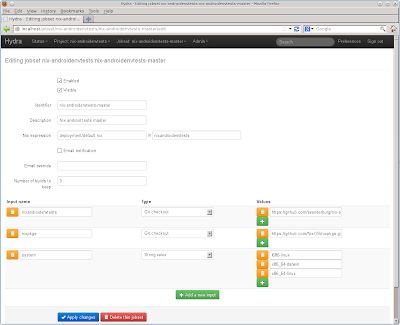 As can be observed from the screenshot, we configure the nix-androidenvtests jobset as follows:


The Android testcase is a relatively simple project with simple parameters. Hydra has many more available options. The following screenshot shows the jobset configuration of disnix-trunk: 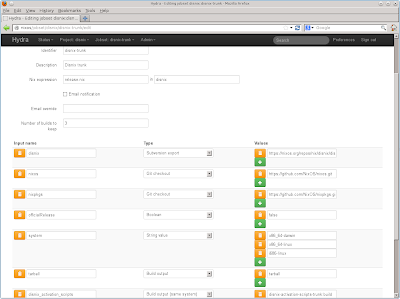 In the above configuration, apart from strings and VCS checkouts, we use a number of other interesting parameter types:


If we have defined a jobset and if it's enabled, then the evaluator should regularly check it, and their corresponding jobs should appear in the queue view (which can be accessed from the menu by picking Status -> Queue): 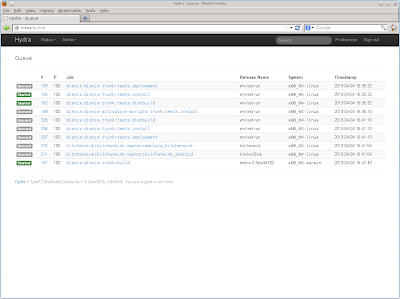 
To inspect the build results, we can pick a jobset and open the 'Job status' tab. The following image shows the results of the nix-androidenvtests-master jobset: 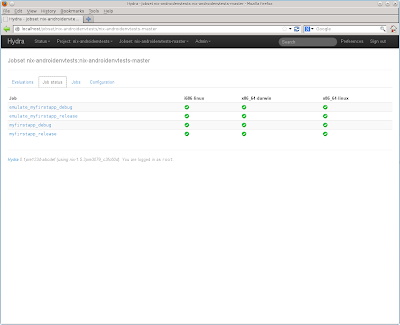 As can observed from the screenshot, we have executed its jobs on three platforms and all the builds seem to have succeeded.


In addition to building jobs and performing testcases, it is also desired to obtain the build artifacts produced by Hydra so that we can run or inspect them locally. There are various ways to do this. The most obvious way is to click on a build result, that will redirect you its status page.

The following page shows you the result for the emulate_myfirstapp_release, a job that produces a script starting the Android emulator running the release version of the demo app: 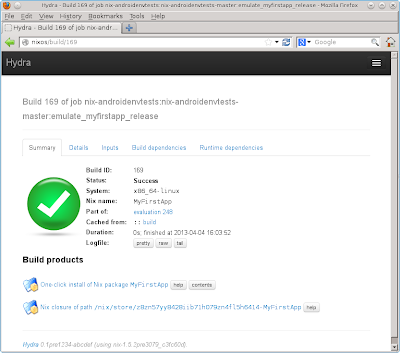 By taking the url to which an one click install link points and by running the following instruction (Nix is required to be present on that machine):


The package gets downloaded and imported in the Nix store of the machine and can be accessed under the same Nix store path as the status page shows (which is /nix/store/z8zn57...-MyFirstApp. By running the following command-line instruction:

We can automatically launch an emulator instance running the recently built app.

For mobile apps (that are typically packaged inside an APK bundle for Android or an IPA bundle for iOS), or documents (such as PDF files) it may be a bit inconvenient to fetch and import the remote builds into the Nix store of the local machine to view or to test them. Therefore, it is also possible to declare build products inside a build job.

For example, I have adapted the buildApp {} functions for Android and iOS apps, shown in my earlier blog posts, to declare the resulting bundle as build product, by appending the following instructions to the build procedure:


The above shell commands adds a nix-support/hydra-build-products file to the resulting package, which is a file that Hydra can parse. The first two columns define the type and subtype for the build product, the third column specifies the path to the build product.

As a result, building an App with Hydra produces the following status page: 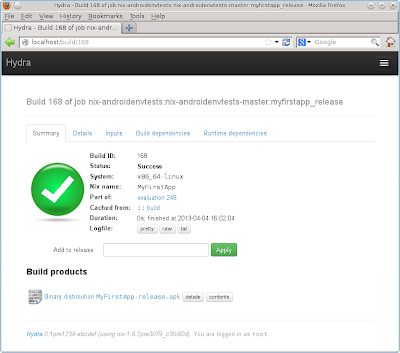 As can be observed, the page provides a convenient download link that allows us to download the APK file. Another interesting benefit is that I can use my Android phone to browse to this result page and to install it automatically, saving me a lot of effort. ;)

The most powerful mechanism to obtain builds is probably the Nix channel mechanism. Every project and jobset have a channel, which info page can be accessed by selecting the 'Channel' option from the project or jobset menu. The following screenshot shows the Nix channel page for the nix-androidenvtests-master jobset: 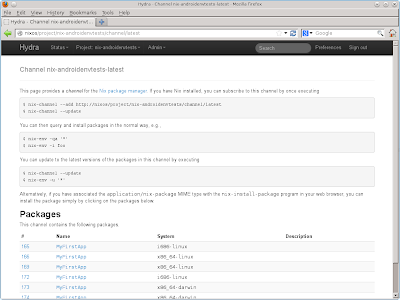 The above page displays some instructions that users having the Nix package manager installed must follow. By adding the Nix channel and updating it, the user receives a collection of Nix expressions and a manifest with a list of binaries. By installing a package that's defined in the channel, the Nix package gets downloaded automatically and added to the user's Nix profile.


We are using Hydra for a short time now at Conference Compass, primarily for producing mobile apps for the Android and iPhone (which is obvious to people that know me). It's already showing us very promising results. To make this possible I'm using the Nix functions that I have described in earlier blog posts.

I have also worked with the Hydra developers to make some small changes to make my life more convenient. I have contributed a patch that allows build products with spaces in them (as this is common for Apps), and I have adapted/fixed the included NixOS configuration module so that Hydra can be conveniently installed in NixOS using a reusable module. I'd like to thank the Hydra developers: Eelco Dolstra, Rob Vermaas, Ludovic Courtès, and Shea Levy for their support.


In this blog post, I have given an incomplete tour of Hydra's features with some examples I care about. Apart from the features that I have described, Hydra has a few more facilities, such as creating views and releases and various management facilities. The main reason for me to write this blog post is to keep the explanation that I have given to my colleagues as a reference.

This blog post describes Hydra from a user/developer perspective, but I also had to deploy a cluster of build machines, which is also interesting to report about. In the next blog post, I will describe what I did to set up a Hydra cluster.


For people that are eager to try Hydra: Hydra is part of the Nix project and available as free and open-source software under the GPLv3 license.

There are also a number of publications available about Nix buildfarms. The earliest prototype is described in Eelco Dolstra's PhD thesis. Furthermore, on Eelco's publications page a few papers about the Nix buildfarm can be found.