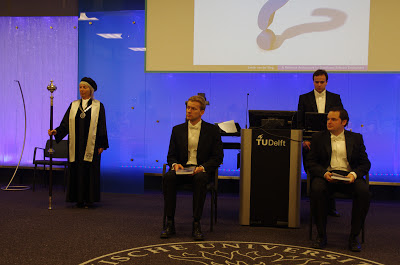 As a follow up story on the previous two blog posts, I can tell you that I have defended my PhD thesis last Monday, which went successfully. Now I can officially call myself a Doctor.

It was quite a tense, busy and interesting day. I'm not really used to days in which you are the centre of attention for most of the time. In the morning, our foreign guests: Sam Malek and Roberto di Cosmo (who are members of my committee) arrived to tell a bit about their ongoing research. We had some sort of a small software deployment workshop with quite some interesting ideas and discussions. Having them visiting us, gave me some renewed excitement about ongoing research and some interesting future ideas, since software deployment (as I have explained) is typically a misunderstood and under appreciated research subject.

After our small workshop, I had to quickly pick up our suits, and then return to the university. In the early afternoon, I had to give a laymen's talk to my family and friends in which I tried to explain the background and the goal of my PhD thesis. Then the actual defence started lasting for exactly one hour (no more, no less) in which the committee members asked me questions about my thesis and the accompanied propositions.

At Delft University of Technology and any other Dutch university, there is a lot of ceremonial stuff involved with the PhD defence. Professors have to be dressed up in gowns. Me and my paranimphs (the two people sitting in front of me who help me and take over my defence if I pass out) had to be dressed up in suits. I have to address to committee members formally depending on their roles, such as: "hooggeleerde opponent" and the committee members had to formally address me with "waarde promovendus".

I received some interesting questions during my defence round. To have an idea what these questions were, Vadim Zaytsev has made 140 character transcriptions of each question and answer on Twitter.

Although I was experiencing some nervousness at the beginning of the day, as I didn't know what exactly was going to happen and what kind of questions I would receive, in the end it was fun and I liked it very much. After the defence I received my PhD diploma: 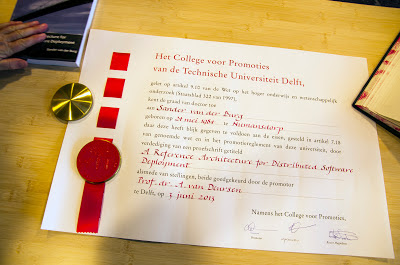 For people that want to know what my thesis is exactly about: