As described in a blog post from a while ago, NixOS deviates on certain aspects from the Filesystem Hierarchy Standard (FHS) for very good reasons. For example, NixOS lacks standard directories such as /usr/bin and /usr/lib that conventional Linux distributions have. The most important reason that Nix/NixOS deviates from the FHS is to provide reliable and reproducible deployment of packages.

The filesystem organization that Nix uses, in which every package is stored in a separate folder in a so called "Nix store", is typically not a problem to get software packaged and deployed in source form.

Packages in Nix are deployed from build recipes called Nix expressions that typically invoke functions implementing abstractions ensuring that the specified dependencies can be found in a convenient manner.

For example, when providing Java or Perl dependencies, the generic builder may automatically set some required environment variables, such CLASSPATH or PERL5LIB containing Java or Perl dependencies. Moreover, a number of build utilities have been patched (such as ld) to automatically add shared libraries to an ELF executable's RPATH allowing it to find the libraries that it needs (you could see this as as static linking of shared libraries to an executable).

However, deployment of third party binary packages is a bit complicated and inconvenient in NixOS for the following reasons:


As a solution, we often use PatchELF to change the path to the dynamic linker and modify the RPATH of a binary allowing it to find the libraries that it needs. We may also have to wrap executables in shell scripts to set certain environment variables, such as LD_LIBRARY_PATH.

Some applications that are packaged in Nixpkgs this way are Adobe Reader, Belastingaangifte (Dutch Tax administration) and the Android SDK, as I have described in two earlier blog posts.

However, I have recently developed something that can solve this problem in a different way.

We can also use the user environment mechanism in combination with setting up a chroot environment to simulate an FHS-compatible filesystem. This allows us to run an unpatched binary that works out of the box, if all required dependencies of the package are (correctly) specified.

I have created a Nix function called buildFHSChrootEnv {} which makes it possible to compose such environments. This function roughly does the following:


Setting up the dynamic parts of the chroot environment


Merely composing a /usr profile is not enough to get a working chroot environment because they only contain the static parts of a system, such as executables, libraries, and data files. We also have to set up a few dynamic parts. A collection of configuration scripts bundled with the generated /usr profile can be used for this purpose:


tl;dr - Getting Steam to work under NixOS


If you're still awake and still interested in reading this blog post, I will reveal why I have done all this work, which is probably much more exciting to read. In fact, this function's primary use case is to get Steam working in NixOS. Steam is a very special piece of software compared to other binary-only packages, because:


By using the buildFHSChrootEnv {} Nix function getting Steam (including the games installed by it) to run in NixOS is a piece of cake. First I had to package Steam itself, which was quite easy:


I just had to unpack the Steam Debian package and move its contents into the Nix store. I intentionally did not patch or wrap anything.

Then I had to create a Nix expression that composes a FHS-compatible chroot environment with Steam's dependencies and runtime settings (such as OpenGL driver settings):


After becoming the super user, I can install the above Nix expression providing the /usr environment profile and configuration scripts, by running:


I can do the bind mounts by running:


And then enter the chroot environment by running:


Now I have entered the chroot environment in which I can run the unpatched Steam executable. However, I should not run Steam as a root user. Therefore, I have to become "myself" again:


And now I can finally run Steam, install my favourite games and play them: 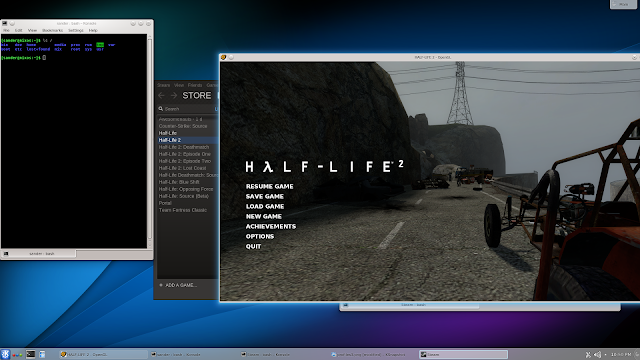 As you may see in the screenshot above, it works quite well on my machine. Moreover, to give you some proof that I'm not lying, I have also opened a terminal in the background showing you NixOS' root folder that does not contain most of the standard FHS directories.

Finally, if you need to discard the chroot environment (which should not be necessary IMHO :P), you could run:


In this blog post, I have described the buildFHSChrootEnv {} Nix function that composes FHS-compatible chroot environments in NixOS, allowing me to run Steam and other third party binary packages without patching them.

However, this approach also has a big drawback. In order to chroot, we need super-user privileges making it hard to properly support unprivileged user installations of such packages. Most "ordinary" Nix packages can be deployed by unprivileged users without any trouble. Therefore, I would not recommend this approach over patching executables with PatchELF, unless there is no other way, such as in Steam's case.


This is not the first attempt to get Steam packaged in Nixpkgs. In my attempt, I have tried to use the chroot approach which turns out to work. I'd like to thank Evgeny Egorochkin, Aszlig Neusepoff and Carles Pagès for their earlier efforts.


The buildFHSChrootEnv {} function as well as the Steam components are part of Nixpkgs.