Backing up Nix (and Hydra) builds

One of the worst things that may happen to any computer user is that filesystems get corrupted or that storage mediums, such as hard drives, break down. As a consequence, valuable data might get lost.

Likewise, this could happen to machines storing Nix package builds, such as a Hydra continuous build machine that exposes builds through its web interface to end users.


One of the key features of the Nix package manager and its related sub projects is reproducible deployment -- using Nix expressions (which are basically recipes that describe how components are built from source code and its dependencies), we can construct all static components of which a system consists (such as software packages and configuration files).

Moreover, Nix ensures that all dependencies are present and correct, and removes many side effects while performing a build. As a result, producing the same configuration with the same set of expressions on a different machine should yield (nearly) a bit identical configuration.

So if we keep a backup of the Nix expressions stored elsewhere, such as a remote Git repository, we should (in theory) have enough materials to reproduce a previously deployed system configuration.

However, there are still a few inconveniences if you actually have to do this:


Getting the dependencies of packages


To alleviate the first two inconveniences, we must also backup the actual Nix packages belonging to a configuration including all their dependencies.

Since all packages deployed by the Nix package manager typically reside in a single Nix store folder (typically /nix/store), that may also contain junk and irrelevant stuff, we have to somehow select the packages that we consider relevant.


In Nix, there are various ways to query specific dependencies of a package. When running the following query on the Nix store path of a build result, such as a Disnix, we can fetch all its runtime dependencies:


What the above command does is listing the transitive Nix store path references that a package contains. In the above example, these paths correspond to the runtime dependencies of Disnix, since they are referenced from bash scripts, as well as the RPATH fields of the ELF binaries and prevent the executables to run properly if any of them is missing.

According to the nix-store manual page, the above closure refers to a binary deployment of a package, since it contains everything required to run it.

Every Nix expression that builds something indirectly calls this function. The purpose of a derivation is composing environments in which builds are executed.

For example, if we run the previous query on a store derivation file:


Then all transitive references to the store derivation files are shown, which correspond to all build-time dependencies of Disnix. According to the nix-store manual page the above closure refers to a source deployment of package, since the store derivations are low-level specifications allowing someone to build a package from source including all its build time dependencies.


The above command only includes the realised store paths that have been built before. By adding the --force-realise parameter to the previous command-line instruction, we can force all outputs of the derivations to be built.

According to the nix-store manual page, the above closure refers to a cached deployment of a package.


Besides querying the relevant Nix store components that we intend to backup, we also have to store them elsewhere. In most cases, we cannot just simply copy the Nix store paths to another location and copy it back into the Nix store at some later point:


For these reasons, it is recommendable to use nix-store --export, that serializes a collection of Nix store paths into a single file including their meta-information. For example, the following command-line instruction serializes a cached deployment closure of Disnix:


The resulting closure file (disnix-cached.closure) can easily be stored on many kinds of mediums, such as an external harddrive using a FAT32 filesystem. We can import the the closure file into another Nix store by running:

Storing backups of a collection of Nix components efficiently


In principle, the export and import nix-store operations should be sufficient to make reliable backups of any Nix package. However, the approach I described has two drawbacks:


To fix these inefficiencies, we need an approach that stores serializations of each Nix store path individually, so that we can check which paths have been backed up already and which still need to be serialized. Although we could implement such an approach ourselves, there is already a Nix utility that does something similar, namely: nix-push.

Normally, this command is used to optimize the build times of source builds by making binary substitutes available that can be downloaded instead, but it turns out to be quite practical for making backups as well.

If I run the following instruction on a collection of Nix store paths:


A binary cache is created in the /home/sander/cache directory from the closure of the Disnix package. The resulting binary cache has the following structure:


For each Nix store path of the closure, an xz compressed NAR file is generated (it is also possible to use bzip2 or no compression) that contains a serialization of an individual Nix store path (without meta-information) and a narinfo file that contains its corresponding meta-information. The prefix of the NAR file corresponds to its output hash while the prefix of the narinfo file corresponds to the hash component of the Nix store path. The latter file contains a reference to the former NAR file.

If, for example, we change Disnix and run the same nix-push command again, then only the paths that have not been serialized are processed while the existing ones remain untouched, saving redundant diskspace and backup time.

Restoring a package from a binary cache can be done as follows:


Simply realizing a Nix store path while providing the location to the binary cache as a parameter causes it to download the substitute into the Nix store, including all its dependencies.


How can this approach be applied to Hydra builds? Since Hydra stores many generations of builds (unless they are garbage collected), I typically make a selection of the ones that I consider important enough by adding them to a release.

Releases on Hydra are created as follows. First, you have to be logged in and you must select a project from the project overview page, such as Disnix: 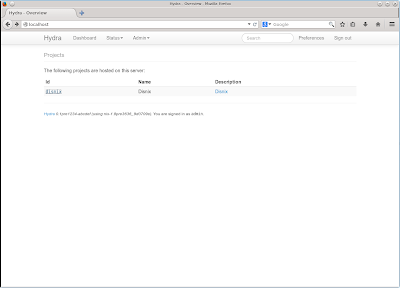 Clicking on a project will redirect you to a page that shows you the corresponding jobsets. By unfolding the actions tab, you can create a release for that particular project: 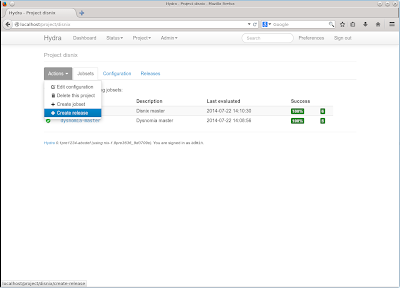 Then a screen will be opened that allows you define a release name and description: 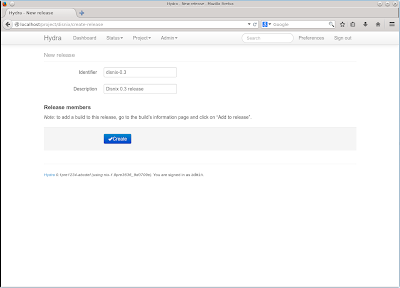 After the release has been created, you can add builds to it. Builds can be added by opening the jobs page and selecting build results, such as build.x86_64-linux: 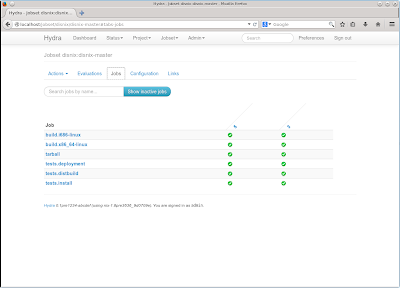 After clicking on a job, we can add it to a release by unfolding the 'Actions' tab and selecting 'Add to release': 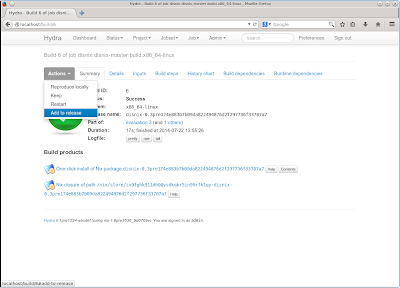 The following dialog allows us to add the build to our recently created: disnix-0.3 release: 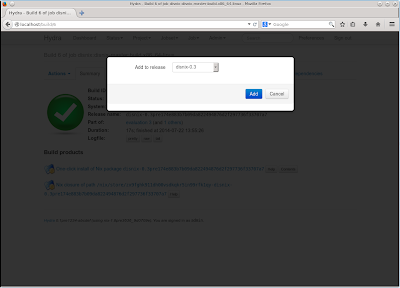 When we open the 'Releases' tab of the project page and we select the disnix-0.3 release, we can see that the build has been added: 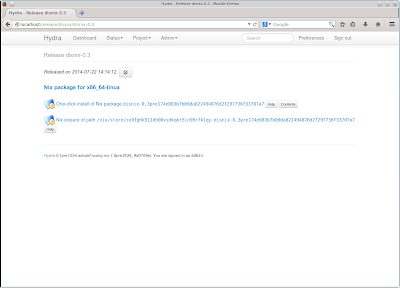 Manually adding individual builds is a bit tedious if you have many them. Hydra has the ability to add all jobs of an evaluation to a release in one click. The only prerequisite is that each build must tell Hydra (through a file that resides in $out/nix-support/hydra-release-name of the build result) to which release it should belong.

For me adapting builds is a bit inconvenient and I also don't need the ability to add builds to arbitrary releases. Instead, I have created a script that adds all builds of an evaluation to a single precreated release, which does not require me to adapt anything.


Automatically creates a release with name: disnix-0.3 and description: "Disnix 0.3", and adds all the successful builds of evaluation 3 to it.


To backup Hydra releases, I have created a Perl script that takes a JSON configuration file as parameter that looks as follows:


The configuration file defines an object with three members:


By running the following command, I can backup the releases:

The backup approach (using a binary cache) also allows me to update the releases and to efficiently make new backups. For example, by changing the disnix-0.3 release and running the same command again, only new paths are being exported.

One of the things that may happen after updating releases is that some NAR and narinfo files have become obsolete. I have also created a script that takes care of removing them automatically. What it basically does is comparing the release's closure files with the contents of the binary cache and removing the files that are not defined in any of the closure files. It can be invoked as follows:


Backing up the Hydra database


In addition to releases, we may want to keep the Hydra database so that we don't have to reconfigure all projects, jobsets, releases and user accounts after a crash. A dump of the database can be created, by running:


And we can restore it by running the following command:


In this blog post, I have described an approach that allows someone to fully backup Nix (and Hydra) builds. Although it may feel great to have the ability to do so, it also comes with a price -- closures consume a lot of disk space, since every closure contains all transitive dependencies that are required to run or build it. In some upgrade scenarios, none of the dependencies can be shared which is quite costly.

In many cases it would be more beneficial to only backup the Nix expressions and Hydra database, and redo the builds with the latest versions of the dependencies, unless there is really a good reason to exactly reproduce an older configuration.

Furthermore, I am not the only person who has investigated Hydra backups. The Hydra distribution includes a backup script named: hydra-s3-backup-collect-garbage that automatically stores relevant artifacts in an Amazon S3 bucket. However, I have no clue how to use it and what it's capabilities are. Moreover, I am an old fashioned guy who still wants store backups on physical mediums rather than in the cloud. :).

The scripts described in this blog post can be obtained from my Github page. If other people consider any these scripts useful, I might reserve some time to investigate whether they can be included in the Hydra distribution package.

UPDATE: I just implemented a fix for Hydra that automatically composes a release name out of the project name and evaluation id if no release name has been defined in any of the builds. The fix has been merged into the main Hydra repository. This makes the hydra-release-eval script obsolete.