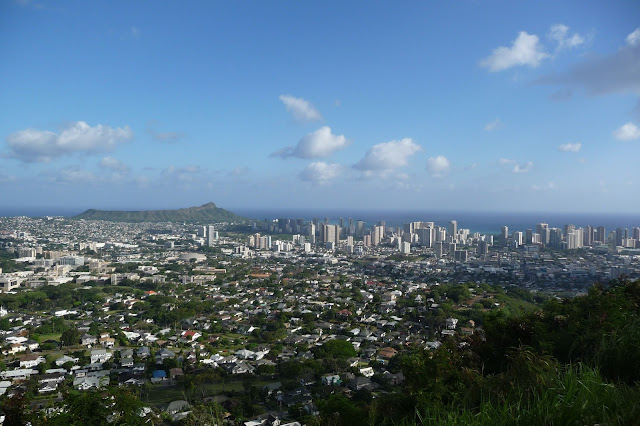 Moreover, the corresponding research paper was accepted for presentation at the SEAMS 2011 symposium (co-located with ICSE 2011) in Honolulu (Hawaii), which was (obviously!) a nice place to visit. :-)

Disnix's development was progressing at a very low pace for a while after I left academia, but since the end of 2014 I made some significant improvements. In contrast to the basic toolset, I did not improve Dynamic Disnix -- apart from the addition of a port assigner tool, I only kept the implementation in sync with Disnix's API changes to prevent it from breaking.

Recently, I have used Dynamic Disnix to give a couple of demos. As a result, I have improved some of its aspects a bit. For example, some basic documentation has been added. Furthermore, I have extended the framework's architecture to take a couple of new deployment planning aspects into account.


For readers unfamiliar with Disnix: the primary purpose of the basic Disnix toolset is executing deployment processes of service-oriented systems. Deployments are driven by three kinds of declarative specifications:


By writing instances of the above specifications and running disnix-env:


Disnix executes all activities to get the system deployed, such as building their services from source code, distributing them to the target machines in the network and activating them. Changing any of these models and running disnix-env again causes the system to be upgraded. In case of an upgrade, Disnix will only execute the required activities making the process more efficient than deploying a system from scratch.


So, what makes Disnix's deployment approach static? When looking at software systems from a very abstract point of view, they are supposed to meet a collection of functional and non-functional requirements. A change in a network of machines affects the ability for a service-oriented system to meet them, as the services of which these systems consist are typically distributed.

We may also want to optimize a system's non-functional properties, such as its responsiveness, by adding more machines to the network that offer more system resources, or by changing the configuration of existing machine, e.g. upgrading the amount available RAM.

The basic Disnix toolset is considered static, because all these events events require manual modifications to the Disnix models for redeployment, so that a system can meet its requirements under the changed conditions.

For simple systems, manual reconfiguration is still doable, but with one hundred services, one hundred machines or a high frequency of events (or a combination of the three), it becomes too complex and time consuming.

For example, when a machine has been added or removed, we must rewrite the distribution model in such a way that all services are deployed to at least one machine and that none of them are mapped to machines that are not capable or allowed to host them. Furthermore, with microservices (one of their traits is that they typically embed HTTP servers), we must typically bind them to unique TCP ports that do not conflict with system services or other services deployed by Disnix. None of these configuration aspects are trivial for large service-oriented systems.


Dynamic Disnix extends Disnix's architecture with additional models and tools to cope with the dynamism of service oriented-systems. In the latest version, I have extended its architecture (which has been based on the old architecture described in the SEAMS 2011 paper and corresponding blog post): 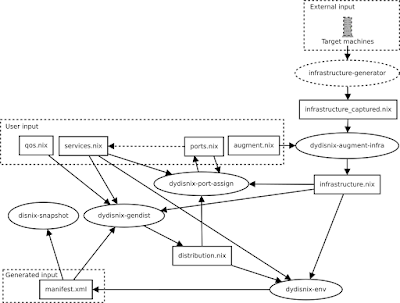 The above diagram shows the structure of the dydisnix-self-adapt tool. The ovals denote command-line utilities, the rectangles denote files and the arrows denote files as inputs or outputs. As with the basic Disnix toolset, dydisnix-self-adapt is composed of command-line utilities each being responsible for executing an individual deployment activity:


When a system has been configured to be (statically) deployed with Disnix (such as the infamous StaffTracker example cases that come in several variants), we need to add a few additional deployment specifications to make it dynamically deployable.


First, we must configure the machines in such a way that they publish their own configurations. The basic toolset comes with a primitive solution called: disnix-capture-infra that does not require any additional configuration -- it consults the Disnix service that is installed on every target machine.


and running disnix-capture-infra, we can obtain the machines' configuration properties:


By setting the following environment variable, we can configure Dynamic Disnix to use the above command to capture the machines' infrastructure properties:


Alternatively, there is the Dynamic Disnix Avahi publisher that is more powerful, but at the same time much more experimental and unstable than disnix-capture-infra.

When using Avahi, each machine uses multicast DNS (mDNS) to publish their own configuration properties. As a result, no bootstrap infrastructure model is needed. Simply gathering the data published by the machines on the same subnet suffices.

When using NixOS on a target machine, the Avahi publisher can be enabled by cloning the dydisnix-avahi Git repository and adding the following lines to /etc/nixos/configuration.nix:


To allow the coordinator machine to capture the configurations that the target machines publish, we must enable the Avahi system service. In NixOS, this can be done by adding the following lines to /etc/nixos/configuration.nix:


When running the following command-line instruction, the machines' configurations can be captured:


The Java version of StaffTracker for example uses MySQL to store data. Typically, it is undesired to publish the authentication credentials over the network (in particular with mDNS, which is quite insecure). We can augment these properties to the captured infrastructure model with the following augmentation model (augment.nix):


The above model implements a very simple password policy, by iterating over each target machine in the discovered infrastructure model and adding the same mysqlUsername and mysqlPassword property when it encounters a MySQL container service.


In addition to a services model and a dynamically generated (and optionally augmented) infrastructure model, we must map each service to machine in the network using a configured strategy. A strategy can be programmed in a QoS model, such as:


With the services model, augmentation model and QoS model, we can dynamically deploy the StaffTracker system (without manually specifying the target machines and their properties, and how to map the services to machines):


The Node.js variant of the StaffTracker example requires unique TCP ports for each web service and web application. By providing the --ports parameter we can include a port assignment specification that is internally managed by dydisnix-port-assign:


When providing the --ports parameter, the specification gets automatically updated when ports need to be reassigned.

Making a system self-adaptable from a deployment perspective


With dydisnix-self-adapt we can make a service-oriented system self-adaptable from a deployment perspective -- this tool continuously monitors the network for changes, and runs a redeployment when a change has been detected:


For example, when shutting down a machine in the network, you will notice that Dynamic Disnix automatically generates a new distribution and redeploys the system to get the missing services back.

Likewise, by adding the ports parameter, you can include port assignments as part of the deployment process:


By adding the --snapshot parameter, we can preemptively capture the state of all stateful services (services annotated with deployState = true; in the services model), such as the databases in which the records are stored. If a machine hosting databases disappears, Disnix can restore the state of the databases elsewhere.


Keep in mind that this feature uses Disnix's snapshotting facilities, which may not be the best solution to manage state, in particular with large databases.


In this blog post, I have described an extended architecture of Dynamic Disnix. In comparison to the previous version, a port assigner has been added that automatically provides unique port numbers to services, and the disnix-snapshot utility that can preemptively capture the state of services, so that they can be restored if a machine disappears from the network.

Despite the fact that Dynamic Disnix has some basic documentation and other improvements from a usability perspective, Dynamic Disnix remains a very experimental prototype that should not be used for any production purposes. In contrast to the basic toolset, I have only used it for testing/demo purposes and I still have no real-life production experience with it. :-)

Moreover, I still have no plans to officially release it yet as many aspects still need to be improved/optimized. For now, you have to obtain the Dynamic Disnix source code from Github and use the included release.nix expression to install it. Furthermore, you probably need to a lot of courage. :-)

Finally, I have extended the Java and Node.js versions of the StaffTracker example as well as the virtual hosts example with simple augmentation and QoS models.