Disnix: A toolset for distributed deployment

On February the 14th, I have released Disnix 0.2. It seems that I have picked a nice date for it, just like the release date of the of Disnix 0.1, which was released on April the 1st 2010 (and that's no joke). Since I haven't written any blog post about Disnix yet, I'll give some info here. 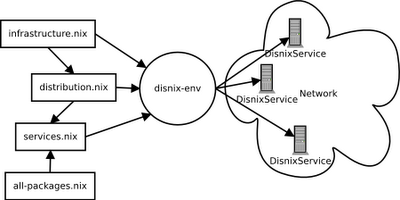 The figure above shows how Disnix works in a nutshell. In the center the disnix-env command-line tool is shown, which performs the complete deployment process of a service-oriented system. On the left, various models are shown. The services model captures all the service (distributable components) of which a system consists, their types and inter-dependencies. This model includes a reference to all-packages.nix, a Nix expression capturing intra-dependency compositions. The infrastructure model captures the available machines in the network and their relevant properties/capabilities. The distribution model maps services defined in the services model to machines defined in the infrastructure model. On the right, a network of machines is shown, which have all have the DisnixService installed providing remote access to deployment operations.

By writing instances of the models mentioned earlier and by running:

By adapting the models and running disnix-env again, an upgrade is performed instead of a full installation. In this case only components which have changed are rebuilt and transferred to the target machines in the network. Moreover, only obsolete services are deactivated and new services are activated.


The code fragement above shows a Disnix expression for the StaffTracker example included in the Disnix repository. The main difference between this expression and an ordinary Nix expression is that it has two function headers which takes intra-dependencies and inter-dependencies respectively to configure the component. The inter-dependency arguments are used in this expression to generate a so called context XML file, which Apache Tomcat uses to configure resources such as JDBC connections, containing a URL, port number and authentication credentials for a MySQL database residing on a different machine in the network. For other types of components a different configuration file has to be created.


The above expression shows the services model, used to capture of which distributable components a system consists. Basically, this model is a function taking three arguments: the distribution model (shown later), a collection of Nixpkgs and a system identifier indicating the architecture of a target host. The function returns an attribute set in which each attribute represents a service. For each service various properties are defined, such as a name, a pkg attribute referring to a function which creates an intra-dependency composition of a service (defined in an external file not shown here), dependsOn composing the inter-dependencies and a type, which is used for activation and deactivation of the service.


The expression shown above is an infrastructure model, which captures machines in the network and their relevant properties/capabilities. This expression is an attribute set in which each attribute represents a machine in the network. Some properties are mandatory, such as the hostname indicating how the Disnix service can be reached. The system property denotes the system architecture so that a service is built for that particular platform. Other properties can be freely chosen and are used for activation/deactivation of a component.


The final expression shown above is the distribution model, mapping services to machines in the network. This expression is a function taking the infrastructure model as parameter. The body is an attribute set in which every attribute representing a service refers to a list of machines in the network. It also allows you to map a service to multiple machines for e.g. load balancing.

The models shown earlier are used by Disnix to perform the complete deployment process of a service-oriented system, i.e. building services, transferring services and the activation of services. Because Disnix uses the purely functional properties of Nix, this process is reliable and efficient. If a system is upgraded, no components are removed and overwritten, since everything is stored in isolation in the Nix store. So while upgrading, we can still keep the current system intact. Only during the transition phase in which services are deactivated and activated the system is inconsistent, but Disnix keeps this time window as small as possible. Moreover, a proxy can be used during this phase to queue connections, which makes the upgrade process truly atomic. 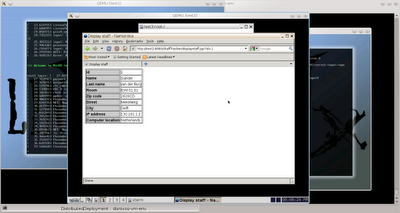 Although Disnix supports the deployment of a service-oriented system, some additional extensions have been developed to make deployment more convenient:


Disnix, the extensions and some examples can be obtained from the Disnix web page: http://nixos.org/disnix. Disnix is also described in several academic papers. The paper: 'Disnix: A toolset for distributed deployment' describes the architecture of the Disnix toolset. This paper is however somewhat outdated, as there are some minor changes in the current implementation. The paper: 'Automated Deployment of a Heterogeneous Service-Oriented System' describes the 0.1 implementation, which we have used for a case study at Philips Research. The publications and presentation slides can be obtained from the publications and talks sections of my homepage. Moreover, there are some earlier publications about Disnix available as well. In a next blog post, I will explain more about the development process and development choices of Disnix.
Posted by Sander van der Burg at 2:44 PM