Last monday, Richard Stallman, the founder of the Free Software Foundation and the GNU project, gave a guest lecture at Delft University of Technology, which I attended. The talk was titled: 'Copyright versus Community'. The contents of the talk was not really about Free Software specifically, but instead it tries answering the question whether the ideas of Free Software extend to other kinds of works. 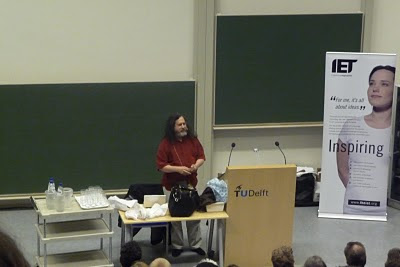 One of the interesting things he explained in his talk is how copyright has been developed throughout the ages, since its introduction in England in the 1500s. First, it started as a form of censorship for Protestants. Later, the first form of "real" copyright was only applicable for publishers and lasted only 14 years. People were still free to copy printed work if they wish (although this wasn't very doable in most cases). Throughout the time the power of copyright was extended. Nowadays, copyright lasts for something like 75 years and apart from publishers, also individuals get severely punished for the most silly kinds of copyright infringement.

Another thing he pointed out is that governments aren't very ethical either; they often support stronger copyright laws and implement annoying wishes of publishing companies in law, instead of listening to people's desires and needs. He pointed out that it's in the nature of humans to share things which each other. Restricting and taking control is against humanity. Because software has an increasingly importance our daily lives, the importance of Free Software also increases, which do not take freedom away of people. (Maybe somebody is going to threaten me after reading this! :P )

I liked the talk, but I found the question round afterwards quite annoying. There were some good questions, but also some lame ones. As a software developer and researcher I also talk quite frequently about Free (and Open-Source) Software and I often see some common "misconceptions" about what it is and what not and what the implications are. During the question round also some lame questions came by to which Richard Stallman usually responded by saying: "I don't understand the question". Later, he elaborated on the question a bit more. So in this blog I'd like to talk a bit more about some common misconceptions I frequently encounter and I'll try to clarify them a bit, because I have to stress these things out a lot to people.

The first class of misconceptions I usually encounter is about the meaning of some terms which are frequently used. When I use the term: "Free Software" often people think that it's about gratis software (free in price). When I use the term: "Open Source" people think that it's about software for which the source code can be obtained. Both of these common misunderstandings don't represent what they are truly about.

Free Software (and Open Source) is not gratis per se. This is probably misunderstood due to the fact that the word 'free' is ambigious in English. The word 'free' refers to freedom, not price. For example, the translation of free software in Dutch is: 'Vrije software' or in French: 'Libre Software'. Moreover, it's perfectly legal to sell free software for whatever price you want, as described here. The point is that it rarely happens in practice nowadays, because one cannot restrict other people from distributing (and selling) it. Also software gets rapidly and easily redistributed through the internet, which is mostly done for free.

Furthermore, Open-Source (and Free Software) is not just about distributing source code. You should also be allowed to study source code, make modifications and redistribute the work (with or without changes). For example, there is software available that includes source code but you are not allowed to distribute your modified versions. This category of software is neither Free nor Open-Source although the source code may be available.

A lot of people intermix the terms "Free Software" and "Open Source" as if it they were the same thing. Although almost all Free Software is Open Source software and vice-versa; they both are two different definitions and represent different philosophies.

Free Software is not just about distributing source code with some additional rights. It's about 4 freedoms, for which having the source code and the ability to study and make changes is an essential precondition. The definition of Open-Source is more or less a pragmatic view of sharing code in an open manner. You need to have to source code and you should be able to study and make/distribute changes. An author, however, may impose some restrictions for integrity. There is also another definition of free software available described in the Debian Free Software Guidelines (mostly used by Debian developers). The Open-Source definition is derived from this.

A lot of people think that Free Software (and Open Source) is the opposite of commercial software. Similarly, during the talk of Richard Stallman some people thought that all commercial activities were bad/unethical. This is a big mistake and not what free software and freedom in general is about.

When I explain this to people, I often receive the question: "But why do companies release software under Free and Open Source licenses then? That's bad for them right?". Usually such companies do not make money from Free and Open Source software by selling copies or licenses, but in different ways, such as by selling support, offering services based around their technology and dual licensing (distributing the same software under a proprietary and free software license simultaneously).

Some companies are quite successful even though their software is Free and Open-Source and can be used by practically anyone. In some cases, releasing software under Free and Open-source licenses gives companies advantages. They can easily built communities around their software and accept external contributions so that the whole community benefits and their commercial services improve.

When I try convincing certain people in certain companies to use a particular Free and Open Source product, they often remind me that I should be very careful, because it may be dangerous. Often these people are referring to the implications of copyleft, which is not always fully understood.

I will first explain a bit what copyleft is about. Copyleft is an instrument in a license which guarantees that the 4 freedoms defined in the Free Software definition are preserved in a work in some degree. The most famous copyleft license is the GNU General Public License (GPL). Basically, this license states that a complete derived work must retain all freedoms. The GPL license is not always applicable for all types of software, such as libraries. Therefore, the GNU Lesser General Public License (LGPL) has been developed with a weaker copyleft. This license basically restricts the boundaries of the copyleft to a library instead of a whole work. Also non-copylefted Free and Open-Source software exists. These licenses allow you to incorporate software into your proprietary products, make modifications and keep them secret.

Even though a license is a copyleft license or not, you are always free to make modifications and to run the software for whatever goal you want. It also does not restrict you selling software for whatever price you want. The only obligation that it gives you, is that you have to give users some degree of freedom. If you're not distributing the software itself, you can keep all you custom modifications secret, copylefted or not. These conditions only become applicable when you're distributing software.

In theory, a modified piece of GPL software can be offered as a service, without giving the changes away. This is because you're not distributing the software itself to end users. To guarantee freedom to users of services the GNU Affero General Public License (AGPL) has been developed, which states that users in a network also have the right to access the source code and the same rights. Although an AGPL license exists, most free software products don't use it.

To be clear about this, using Free Software is never dangerous in the sense that you have to give something away. You only have obligations if you want to (re)distribute derived works or when you give external users access to software.

Sometimes I ask to people why they don't publish a piece of software under a Free and Open-source license. Frequently, I get an answer saying: "Well, then I give up all my rights and I give everything I have away!". This is also a misconception I want to clarify.

When releasing software under a license, you're still the copyright holder. As a copyright holder you have the ability to change a license, even when it's released under a Free and Open-source license (except when you have received external contributions and didn't let the contributors transfer their copyright to you). Moreover, copyleft may give you some protection, such as the right to obtain the source code of derived works. Releasing software under a free license doesn't mean that it is in the public domain of course.

Hopefully, I have clarified some misconceptions in this blog post a bit. As a Free and Open Source software developer myself, I think it's important to point this out.