In two earlier blog posts, I have explained how the the Nix package manager can be used to deploy .NET software. I'm happy to report that I have extended these possibilities to Disnix.

With these new features it is possible to develop databases for Microsoft SQL server, implement WCF web services and ASP.NET web applications (which may be inter-connected to each other) and to automatically and reliably deploy them in a network of machines using Disnix.

The modifications I had to make to Disnix were relatively minor. Disnix can already be compiled on Cygwin, just as the Nix package manager. Since Disnix is built on top of Nix, it reuses the Nix functions I have developed in earlier blog posts to build Visual Studio projects.

To support these new types of services, I have developed the following activation scripts:


These activation scripts are automatically used by assigning a mssql-database or iis-webapplication type to a service in the Disnix services model.

Important is to know how to get Disnix working on Windows and how to enable support for .NET applications. Most of the installation steps on Windows/Cygwin are the same as UNIX systems. Details of the Disnix installation process can be found in the Disnix documentation.

However, there are a number of details that must be taken care of, which are not described in the manual (yet). Furthermore, the best way to get Disnix working is by compiling it from source so that all the required optional features are enabled.

In order to enable the mssql-database and iis-webapplication activation types, you must first manually install SQL server and IIS on your Windows system: 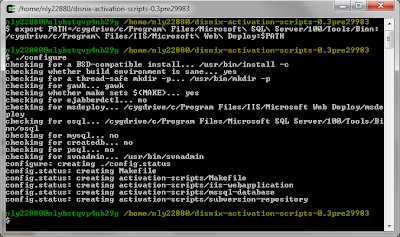 Moreover, the configure script of the disnix-activation-scripts package must be able to find OSQL.EXE and MSDeploy command-line tools, which must be in your PATH. Otherwise the activation types that we need are disabled and we cannot deploy .NET applications.

On my Windows 7 machine, OSQL can be found in: C:\Program Files\Microsoft SQL Server\100\Tools\Binn and MSDeploy in: C:\Program Files\IIS\Microsoft Web Deploy. I have included a screenshot above, which shows you what the output should of the configure script should look like. As you can see, the configure script was able to detect the locations of the command line tools, because I have adapted the PATH environment variable.

We also need to run the Disnix daemon on every machine in the network, so that we can remotely deploy the services we want. Probably the best way to get Cygwin services running is by using the cygrunsrv command, which runs Cygwin programs as Windows services.

Since the core Disnix daemon is a D-Bus service, we need to run the D-Bus system daemon, which can be configured by typing:


The Disnix service can be configured by typing:


Disnix also needs to be remotely connectible. Disnix can use various interfaces, but the recommended interface is SSH. In order to connect through SSH, you also need to configure a SSH server. This can be done by executing the following script on Cygwin:


And you probably need to configure some SSH keys as well, to prevent Disnix asking for passwords for each operation. Check the OpenSSH documentation for more information. 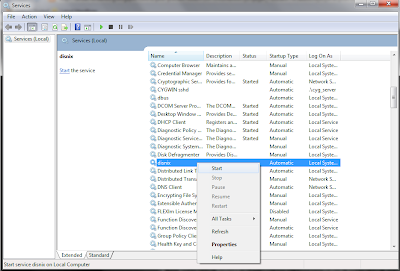 After configuring the services, you probably need to activate them for the fist time, which can be done by the Windows service manager (Control Panel -> System and Security -> Administrative Tools -> Services). You need to pick the Disnix service and select the start option. If you want to use the SSH server, you need to pick and start the 'CYGWIN sshd' service as well. A screenshot is included above.

Now that I have explained how Disnix can be installed and configured on Windows, we probably also like to see what it's capabilities are. As an example case, I have ported the StaffTracker, a motivating example in our WASDeTT paper, from Java to .NET technology, using C# as an implementation language, ADO.NET as database manager, WCF to implement web services, and ASP.NET to create the web application front-end. 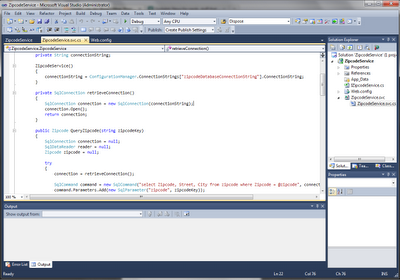 It was a nice opportunity to learn some of these technologies. I have to admit that Visual Studio 2010 was a very convenient development environment and it didn't take much time for me to port the example case. Although I was impressed by this, I currently have no plans to write any software using .NET technology except for this example case. (Perhaps I will port it to Mono as an experiment some day).


As you may notice, the expression above looks similar to an ordinary Nix expression building a Visual Studio project, except that it uses the inter-dependency parameter (zipcodes) to configure a database connection string defined in the Web.config file, so that the web service can connect to its database back-end. More information about setting a connection string through this configuration file, can be found here: http://weblogs.asp.net/owscott/archive/2005/08/26/Using-connection-strings-from-web.config-in-ASP.NET-v2.0.aspx.

By using the Disnix expressions in conjunction with the services, infrastructure and distribution models, the .NET example can be deployed in a network of machines with a single command line instruction:


Below, I have a included a screenshot showing a Disnix deployment scenario with our .NET Staff Tracker example. In this screenshot, you can see a console showing Disnix output, a web browser displaying the entry page of the web application front-end, the IIS manager showing various deployed WCF web services, and the ASP.NET web front-end and the SQL server management studio showing a number of deployed databases. The complete system is deployed using a single command-line instruction. 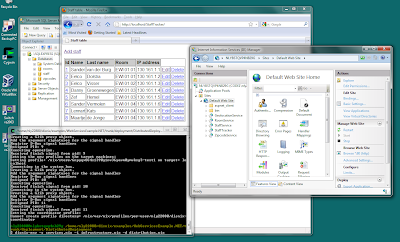 In this blog post I have shown how service-oriented .NET applications can be automatically deployed with Disnix. There are several slight inconveniences however: