Some time ago, I have explored the mobile deployment space domain a bit, by implementing a function capable of building Android Apps with the Nix package manager. However, Android is definitely not the only platform used in the mobile space. Another major one is Apple's iOS, used by mobile devices, such as the iPhone, iPod, and iPad. In this blog post, I describe how I have implemented a Nix function capable of building Apps for these platforms.

Although it was quite some work to package the Android SDK, it took me less work for iOS. However, all prerequisites for this platform cannot be entirely packaged in Nix, due to the fact that they require Xcode, that must be installed through the App store, and it has all kinds of implicit assumptions on the system (such as location of certain tools and binaries), which prevents all required components to be packaged purely. Therefore, I had to use similar "tricks" that I have used to allow .NET applications to be deployed through the Nix package manager.


The first dependency that requires manual installation is Apple's Xcode, providing a set of development tools and an IDE. It must be obtained from the App store through the following URL: https://developer.apple.com/xcode. The App store takes care of the complete installation process. 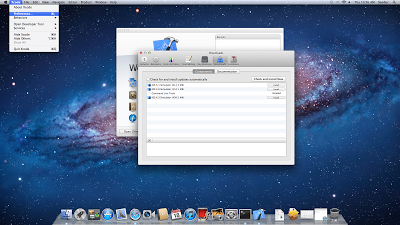 An Xcode installation includes support for the most recent iOS versions by default. If desired, SDKs for older versions can be installed through the same dialog.


To use the Nix package manager, we can either download a collection of bootstrap binaries or we can compile it from source. I took the latter approach for which it is required to install a number of prerequisites through MacPorts. Installation of MacPorts is straight forward -- it's just downloading the installer from their website (for the right Mac OS X version) and running it.


To install Nix from source code, I first had to install a bunch of dependencies through MacPorts. I opened a terminal and I've executed the following commands:
I have obtained the source tarball of Nix from the Nix homepage, and I have installed it from source by running the following command-line instructions:
Furthermore, I was a bit lazy and I only care about using a single-user installation. To use Nix as a non-root user I ran the following command to change the permissions to my user account:
For development, it's also useful to have a copy of Nixpkgs containing expressions for many common packages. I cloned the git repository, by running:
To conveniently access stuff from the Nix packages repository, it is useful to add the following line to the ~/.profile file so that they are in Nix's include path:
I also added channels that provides substitutes for builds performed at our build infrastructure, so that I don't have to compile everything from source:


In order to package iOS applications, we have to make the Xcode build infrastructure available to Nix package builds. However, as explained earlier, we cannot package Xcode in Nix, because it must be installed through other means (through Apple's App store) and it has a number of assumptions on locations of utilities on the host system.

Instead we use the same trick that we have used earlier for the .NET framework -- we create a proxy component wrapper that contains symlinks to essential binaries on the host system. Our xcodewrapper package expression looks as follows:

Basically, the following expression contains a number of symlinks to essential Xcode binaries:

By adding the xcodewrapper to the buildInputs parameter of a package expression, the Xcode build utilities can be found and used.

Building iOS apps for the simulator


Getting Xcode working in Nix is a bit ugly and does not provide full reproducibility as Xcode must be installed manually, but it works. Another important question to answer is, how do we build iOS apps with Nix?

Building iOS apps is pretty straight forward, by running xcodebuild inside an Xcode project directory. The xcodebuild reference served as a good reference for me. The following instruction suffices to build an app for the iPhone simulator:
The above command-line instruction builds an app for the i386 architecture (Apps in the simulator have the same architecture as the host system) using the iPhone 6.0 simulator SDK. The last two parameters ensure that intermediate files generated by the compiler are stored in our temp directory and that the resulting build is stored in our desired prefix, instead of the Xcode project directory.

Furthermore, in order to use a certificate and provisioning profile, we need to import these into the keychain of the user that executes a build. I use the following instructions to automatically create and unlock a new keychain:
The above instructions generate a keychain with the name mykeychain in the user's home directory: ~/Library/Keychains.

To test an app on an Apple device, we must generate an IPA file, a Zip archive containing all files belonging to an App. This can be done by running:
By using the Xcode organiser the given App can be uploaded to an Apple device.

In order to release an App through the Apple App store, we must generate an xcarchive, a zip archive that also contains debugging symbols and plist files. An xcarchive can be generated by adding the archive parameter to xcodebuild. The resulting xcarchive is automatically added to the Xcode organiser.

If the build process has been completed, we can eventually remove our keychain:

NOTE: Before we delete the keychain, we must turn another keychain (in this case the login keychain) the default. Omitting this step might cause corruption to the entire keychain service!


We can also script the iPhone simulator to automatically start an App produced by xcodebuild, for a particular iOS device:
The above command launches an iPhone instance running our simulator build performed earlier. The former command-line option refers to the executable that we have built. The latter specifies the type of device we want to simulate. Other device options that worked for me are: 'iPad', 'iPad (Retina)', 'iPhone (Retina 3.5-inch)', 'iPhone (Retina 4-inch)'. 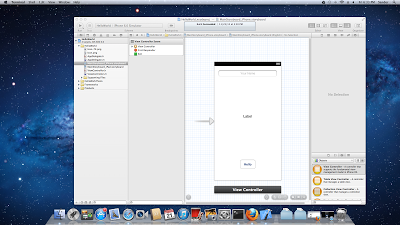 To demonstrate how the iOS deployment functions work, I have implemented the trivial 'Hello world' example case described in Apple's iOS tutorial. It was also a nice exercise to get myself familiar with Xcode and Objective C development.

Apart from implementing the example case, I have made two extensions:


I have encapsulated the earlier described build steps in a Nix function called: xcodeenv.buildApp. To build the Hello World example for the simulator, one could write the following expression: The function is very simple -- it invokes the xcodeenv.buidApp function and takes three parameters: name is the name of the xcode project, src is a path referring to the source code and release indicates whether we want to build for release or not. If release is false, then it will build the app for the simulator. It also assumes that the architecture (arch) is i386 and the SDK is the iphonesimulator, which is usually the case. These parameters can be overridden by adding them to the function parameters of the function invocation.

To make a build for release, the following expression can be written:
The above expression sets the release parameter to true. In this case, the architecture is assumed to be armv7 and the SDK iphoneos, which ensures that the App is build for the right architecture for iOS devices. For release builds we also need to specify the certificate, provisioning profile, and their relevant properties. Furthermore, we can also specify whether we want to generate an IPA (an archive to deploy an App to a device) or xcarchive (an archive to deploy an App to Apple's App store).

The function invocation above conveniently takes care of the build, key signing and packaging process, although there were two nasty caveats:


As with ordinary Nix expressions, we cannot use the previous two expressions to build an App directly, but we also need to compose them by calling them with the right xcodeenv parameter. This is done in the following composition expression:
By using the expression above and by running nix-build, we can automatically build an iOS app: Besides build an App, we can also write an expression to simulate an iOS app: The above expression calls the xcodeenv.simulateApp function that generates a script launching the iPhone Simulator. The name parameter corresponds to the name of the App, the app parameter refers to a simulator build of an App, an the device parameter specifies the device to simulate, such as an iPhone or iPad.

If we take the composition expression (shown earlier), we also see a simulator attribute: simulate_helloworld_iphone, which we can evaluate to generate a script launching a simulator for the iPhone. By executing the generated script we launch the simulator: Which shows me the following: 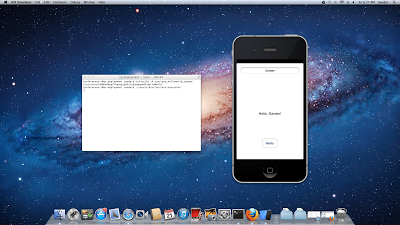 In addition to the iPhone, I have also developed a function invocation simulating the iPad (as can be seen in the composition expression, shown earlier):
And this is the result: 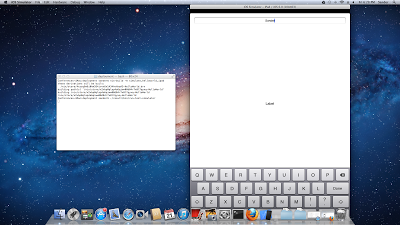 
I have used this function for a quite a few builds and it should work fine. However, in very rare cases it may happen that a generated keychain for signing is not properly removed due to errors in the build infrastructure.

To remedy the problem, I typically open the 'Keychain Access' program and select the following option in the menu: Keychain Access -> Keychain First Aid. In the resulting dialog, I click on the 'Repair' button. Now all the invalid keychain references are removed and everything should work fine again.


In this blog post, I have described two Nix functions that allow users to automatically build, sign and package iOS applications and to run these in an iPhone simulator instance.

Although the Nix functions seems to work, they are still highly experimental, have some workarounds (such as the key signing) and are not entirely pure, due to the fact that it requires Xcode which must be installed through Apple's App store.

I'd like to thank my colleagues Mathieu Gerard (for showing me the keysigning command-line instructions) and Alberto Gonzalez Sanchez (for testing this on Mac OS X Mountain Lion) from Conference Compass.

This function is part of Nixpkgs. The example case can be obtained from my github page.


UPDATE: On July 14, 2016 I have given a presentation about this subject at the Nix meetup in Amsterdam. For convenience, I have embedded the sildes into this blog post: