Today, it's my blog's second anniversary, so it looks like this is a good time for some reflection.


Although I have fewer blog posts this year compared to last year (although the difference is not that big), 2012 was in fact an extremely busy/stressful year. First, I had to write my PhD thesis, which was quite a project. Actually, from February up to August nearly all my time was consumed writing it, when I was not sleeping or eating. Besides my thesis, also some publication work had to be done, such as the HotSWUp publication about deploying mutable software components and a journal version of the WASDeTT paper about Disnix.

Although I was very busy, I've tried to keep blogging as much as possible. In the beginning this worked out well, but later this year I had some difficulties posting anything relevant (as may be observed from April 2012 until October 2012).

I also had some depressing moments. One of them was about science in general. One of the things that made me really mad/frustrated were reviewers "complimenting" our papers with: "this is a remarkable piece of engineering" (which implies that it's not science, so the paper will be rejected). I wrote quite a lengthy blog post about this issue, and dived into literature to find an explanation, which I was able to find.

Another thing that bothered me was the fact that so little of the work that we are doing in the research world are picked up by the other fractions of the software engineering community, such as industry. Similarly, I also see that people in industry have their struggles and needs (in particular: practical application of new concepts), but refrain from finding solution elsewhere or collaborating, such as with the research world. Today, all software engineering fractions more or less all live in our separate world, while it is (obviously) better to collaborate. Although it makes sense to do that, only a few are actually doing it.

Although I had some depressing/stressful moments, I also published two blog posts at the beginning of this year, about fun projects involving my good old Amiga, with a bit of overlap to my research. Most of the work for these blog posts was already done last year, but I still had to write them down.

After finishing my thesis draft and a short break, my employment contract with the university expired and I had to switch jobs. The process of finding a new job was quite interesting. A few things that I've noticed is that only a few companies have real interest in who you are and what background you have. A lot of them use a standard application procedures, such as capacity tests, and a lot of "standard" interview questions. Most of them also treated me as an undergrad and offered me salaries way lower than my PhD salary.

Furthermore, before I started talking to these companies I considered myself still as somebody who's more like an engineer as a scientist. But when I spoke to them, I've noticed then I'm more "scientific" than I thought. Although these observations, nearly all the applications I did went fine and I have received many job offers. I was rejected one time, probably because that company was looking for somebody "who just wants to program in Java", instead of a critical person like me.

Finally, I was hired by Conference Compass as a Software Architect. Here, I still use some stuff I was working on during research, such as deployment with Nix and related tools. I've produced two blog posts related to my deployment work there -- deployment of mobile apps on Android and iOS devices.


Another interesting observation is the "popularity" of my blog. This year, I think I have attracted 10 times as many visitors compared to last year. Especially in the last two months, I've attracted a lot of readers, thanks to Reddit. At this moment, the top 10 of the most frequently read blog posts is:


As with my last's year reflection about my blog, I have noticed that my blog attracts many more readers than all my scientific papers combined. Another thing that I observed is that writing for my blog is more convenient than writing papers, because I'm not bound to all kinds of restrictions, such as the page limit, topics that are interesting (and are uninteresting), the amount of "greek symbols" that I should use, whether something is engineering or science etc. It feels like a big relief, it's much more fun, attracts more readers and gives me more feedback.

Actually, it seems that this observation is not unique to me and has been noticed quite some time ago already by Edsger Dijkstra, a very famous computer scientist who published most of his contributions through EWDs, manuscripts which he wrote about anything he wanted. In EWD1000 titled: 'Twenty-eight years', he reflected over his previous 28 research years and one of the interesting things he wrote in that manuscript is:


"If there is one "scientific" discovery I am proud of, it is the discovery of the habit of writing without publication in mind. I experience it as a liberating habit: without it, doing the work becomes one thing and writing it down becomes another one, which is often viewed as an unpleasant burden. When working and writing have merged, that burden has been taken away."

Most manuscripts of him after 1974 were hand-written and he never owned a computer. Because of that people consider him old fashioned. But on the other hand, he was way ahead of his time. In fact, Dijkstra's way of working could be considered an early form of blogging using a pen+paper+photocopier instead of a computer+internet.

I also think that writing more frequently and distributing your findings more often offers much more value. Quite frequently people give the expression that publishing a paper goes like this:

You reach your goal without any obstacles. But in reality it goes more like this: 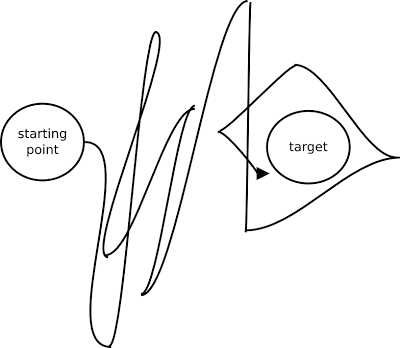 You will reach many obstacles and you may not even fully reach your goal, or only under special circumstances. These obstacles are also interesting to know about, as well as how to practically implement certain aspects. It gives you better feedback, helps to "structure your mind" and to better reach your audience. Most researchers refrain from doing that.

And another thing is, if you really want any research work to succeed, you much also reach non-researchers. For this practical aspects as well as usable software is important. That's probably a big reason why this blog attract quite some readers.


In this blog post I've reflect over 2012 and it seems that it's still worth having this blog. Next year, there is more interesting stuff to come. The final thing I'd like to say is: