Transforming Disnix models to graphs and visualizing them

In my previous blog post, I have described a new tool in the Dynamic Disnix toolset that can be used to automatically assign unique numeric IDs to services in a Disnix service model. Unique numeric IDs can represent all kinds of useful resources, such as TCP/UDP port numbers, user IDs (UIDs), and group IDs (GIDs).

Although I am quite happy to have this tool at my disposal, implementing it was much more difficult and time consuming than I expected. Aside from the fact that the problem is not as obvious as it may sound, the main reason is that the Dynamic Disnix toolset was originally developed as a proof of concept implementation for a research paper under very high time pressure. As a result, it has accumulated quite a bit of technical debt, that as of today, is still at a fairly high level (but much better than it was when I completed the PoC).

For the ID assigner tool, I needed to make changes to the foundations of the tools, such as the model parsing libraries. As a consequence, all kinds of related aspects in the toolset started to break, such as the deployment planning algorithm implementations.

Fixing some of these algorithm implementations was much more difficult than I expected -- they were not properly documented, not decomposed into functions, had little to no reuse of common concepts and as a result, were difficult to understand and change. I was forced to re-read the papers that I used as a basis for these algorithms.

To prevent myself from having to go through such a painful process again, I have decided to revise them in such a way that they are better understandable and maintainable.

As I have already explained in older blog posts, to cope with the limitations of static deployment models (and other static configuration aspects), I have developed Dynamic Disnix, in which various configuration aspects can be automated, including the distribution of services to machines.

A strategy for dynamically distributing services to machines can be specified in a QoS model, that typically consists of two phases:


In the Dynamic Disnix toolset, I have implemented various kinds of distribution algorithms/strategies for all kinds of purposes.

I did not "invent" most of them -- for some, I got inspiration from papers in the academic literature.

Two of the more advanced deployment planning algorithms are graph-based, to accomplish the following goals:


To work with these graph-based algorithms, I originally did not apply any transformations -- because of time pressure, I directly worked with objects from the Disnix models (e.g. services, target machines) and somewhat "glued" these together with generic data structures, such as lists and hash tables.

As a result, when looking at the implementation, it is very hard to get an understanding of the process and how an implementation aspect relates to a concept described in the papers shown above.

In my revised version, I have implemented a general purpose graph library that can be used to solve all kinds of general graph related problems.

Aside from using a general graph library, I have also separated the graph-based generation processes into the following steps:


This new organization provides better separation of concerns, common concepts can be reused (such as graph operations), and as a result, the implementations are much closer to the approximation algorithms described in the papers.


Another advantage of having a reusable graph implementation is that we can easily extend it to visualize the problem graphs.

When I combine these features together with my earlier work that visualizes services models, and a new tool that visualizes infrastructure models, I can make the entire generation process transparent.

For example, the following services model:


can be visualized as follows: 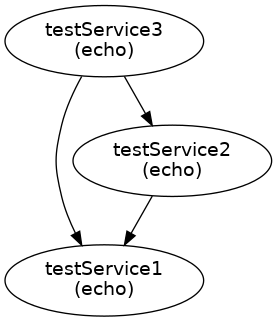 The above services model and corresponding visualization capture the following properties:


We can also visualize the following infrastructure model:


with the following command:

The above infrastructure model declares three machines. Each target machine provides a number of container services (such as a MySQL database server, and echo that acts as a testing container).

With the following command, we can generate a problem instance for the graph coloring problem using the above services and infrastructure models as inputs:


resulting in the following graph: 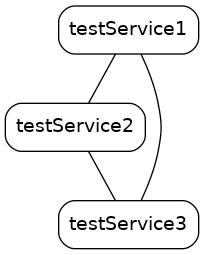 The graph shown above captures the following properties:


Each target machine translates to a color, that we can represent with a numeric index -- 0 is testtarget1, 1 is testtarget2 and so on.

The following command generates the resolved problem instance graph in which each vertex has a color assigned: 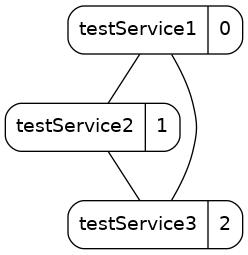 (As a sidenote: in the above graph, colors are represented by numbers. In theory, I could also use real colors, but if I also want that the graph to remain visually appealing, I need to solve a color picking problem, which is beyond the scope of my refactoring objective).

The resolved graph can be translated back into the following distribution model:


As you may notice, every service is distributed to a separate machine, so that every network link between a service is a real network connection between machines.

We can also visualize the problem instance of the multiway cut problem. For this, we also need a distribution model that, declares for each service, which target machine is a candidate.

The following distribution model makes all three target machines in the infrastructure model a candidate for every service:


With the following command we can generate a problem instance representing a host-application graph:


providing me the following output: 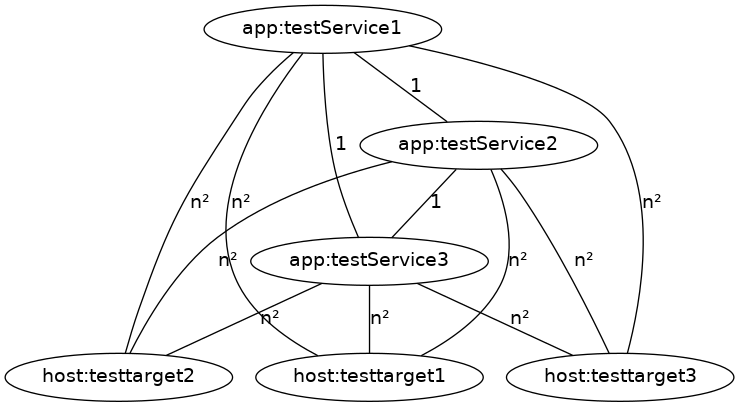 The above problem graph has the following properties:


The objective of solving the multiway cut problem is to cut edges in the graph in such a way that each terminal (host node) is disconnected from the other terminals (host nodes), in which the total weight of the cuts is minimized.

When applying the approximation algorithm in the paper to the above graph:


we get the following resolved graph:

that can be transformed back into the following distribution model:


As you may notice by looking at the resolved graph (in which the terminals: testtarget2 and testtarget3 are disconnected) and the distribution model output, all services are distributed to the same machine: testtarget1 making all connections between the services local connections.


In this blog post, I have described how I have revised the deployment planning algorithm implementations in the Dynamic Disnix toolset. Their concerns are now much better separated, and the graph-based algorithms now use a general purpose graph library, that can also be used for generating visualizations of the intermediate steps in the generation process.

This revision was not on my short-term planned features list, but I am happy that I did the work. Retrospectively, I regret that I never took the time to finish things up properly after the submission of the paper. Although Dynamic Disnix's quality is still not where I want it to be, it is quite a step forward in making the toolset more usable.

Sadly, it is almost 10 years ago that I started Dynamic Disnix and still there is no offical release yet and the technical debt in Dynamic Disnix is one of the important reasons that I never did an official release. Hopefully, with this step I can do it some day. :-)

The good news is that I made the paper submission deadline and that the paper got accepted for presentation. It brought me to the SEAMS 2011 conference (co-located with ICSE 2011) in Honolulu, Hawaii, allowing me to take pictures such as this one: 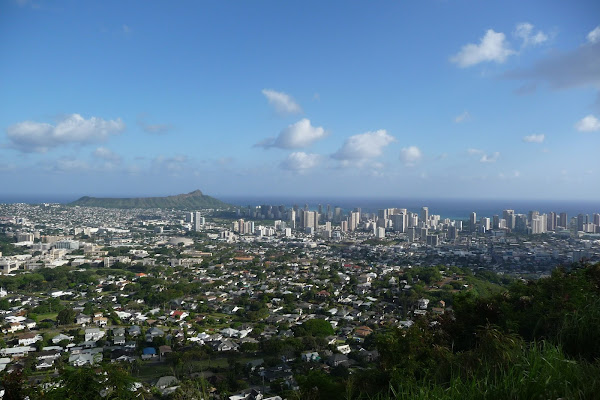 
The graph library and new implementations of the deployment planning algorithms described in this blog post are part of the current development version of Dynamic Disnix.

The paper: "A Self-Adaptive Deployment Framework for Service-Oriented Systems" describes the Dynamic Disnix framework (developed 9 years ago) and can be obtained from my publications page.


To generate the visualizations I used the Graphviz toolset.