A test framework for the Nix process management framework


Although the above features are interesting, one particular challenge is that the framework cannot guarantee that all possible variations will work after writing a high-level process configuration. The framework facilitates code reuse, but it is not a write once, run anywhere approach.

To make it possible to validate multiple service variants, I have developed a test framework that is built on top of the NixOS test driver that makes it possible to deploy and test a network of NixOS QEMU virtual machines with very minimal storage and RAM overhead.

In this blog post, I will describe how the test framework can be used.


Before developing the test framework, I was mostly testing all my packaged services manually. Because a manual test process is tedious and time consuming, I did not have any test coverage for anything but the most trivial example services. As a result, I frequently ran into many configuration breakages.

Typically, when I want to test a process instance, or a system that is composed of multiple collaborative processes, I perform the following steps:


I have developed a Nix function: testService that automates the above process using the NixOS test driver -- I can use this function to create a test suite for systems that are made out of running processes, such as the webapps example described in my previous blog posts about the Nix process management framework.


With the following command, I can connect to webapp2 through the first nginx reverse proxy:


I can create a test suite for the web application system as follows:


The Nix expression above invokes testService with the following parameters:


The readiness and tests functions take the following parameters: instanceName identifies the process instance in the processes model, and instance refers to the attribute set containing its configuration.

Furthermore, they can refer to global process model configuration parameters:


In addition to writing tests that work on instance level, it is also possible to write tests on system level, with the following parameters (not shown in the example):


The above functions also accept the same global configuration parameters, and processes that refers to the entire processes model.

We can also configure other properties useful for testing:


The Nix expression above is not self-contained. It is a function definition that needs to be invoked with all required parameters including all the process managers and profiles that we want to test for.

We can compose tests in the following Nix expression:


The above partial Nix expression (default.nix) invokes the function defined in the previous Nix expression that resides in the nginx-reverse-proxy-hostbased directory and propagates all required parameters. It also composes other test cases, such as docker.

The parameters of the composition expression allow you to globally configure all the desired service variants:


With the following command, we can test our system as a privileged user, using systemd as a process manager:


we can also run the same test, but then as an unprivileged user:


In addition to systemd, any configured process manager can be used that works in NixOS. The following command runs a privileged test of the same service for sysvinit:


With the test driver in place, I have managed to expand my repository of example services, provided test coverage for them and fixed quite a few bugs in the framework caused by regressions.

Below is a screenshot of Hydra: the Nix-based continuous integration service showing an overview of test results for all kinds of variants of a service: 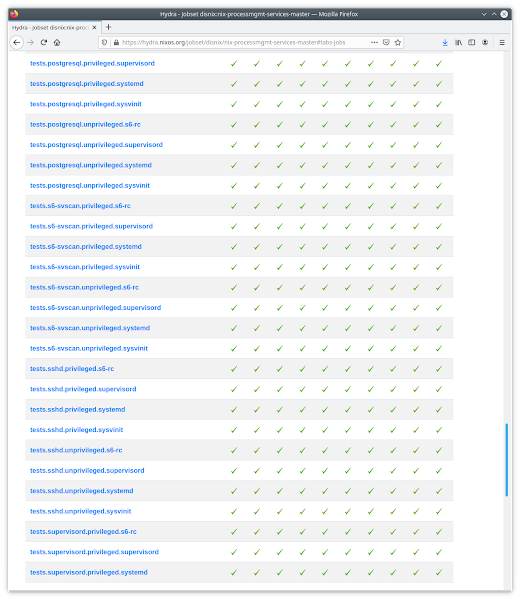 So far, the following services work multi-instance, with multiple process managers, and (optionally) as an unprivileged user:


The following service also works with multiple instances and multiple process managers, but not as an unprivileged user:


The following services work with multiple process managers, but not multi-instance or as an unprivileged user:

Moreover, the multi-instance aspect is IMO also not very useful to explore for these services. For example, I can not think of a useful scenario to have two Hydra instances running next to each other.


The test framework described in this blog post is an important feature addition to the Nix process management framework -- it allowed me to package more services and fix quite a few bugs caused by regressions.

I can now finally show that it is doable to package services and make them work under nearly all possible conditions that the framework supports (e.g. multiple instances, multiple process managers, and unprivileged user installations).

The only limitation of the test framework is that it is not operating system agnostic -- the NixOS test driver (that serves as its foundation), only works (as its name implies) with NixOS, which itself is a Linux distribution. As a result, we can not automatically test bsdrc scripts, launchd daemons, and cygrunsrv services.

In theory, it is also possible to make a more generalized test driver that works with multiple operating systems. The NixOS test driver is a combination of ideas (e.g. a shared Nix store between the host and guest system, an API to control QEMU, and an API to manage services). We could also dissect these ideas and run them on conventional QEMU VMs running different operating systems (with the Nix package manager).

Although making a more generalized test driver is interesting, it is beyond the scope of the Nix process management framework (which is about managing process instances, not entire systems).

Another drawback is that while it is possible to test all possible service variants on Linux, it may be very expensive to do so.

However, full process manager coverage is often not required to get a reasonable level of confidence. For many services, it typically suffices to implement the following strategy:


Implementing the above strategy only requires you to test four variants, providing a high degree of certainty that it will work with all other process managers as well.


Most of the interesting functionality required to work with the Nix process management framework is now implemented. I still need to implement more changes to make it more robust and "dog food" more of my own problems as much as possible.

Eventually, I will be thinking of an RFC that will upstream the interesting bits of the framework into Nixpkgs.


The Nix process management framework repository as well as the example services repository can be obtained from my GitHub page.